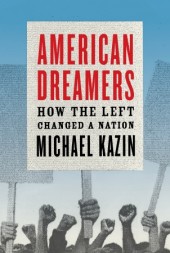 Two years ago, I began writing out all my survey lectures.   Each class averaged 15 pages (with breaks for questions, discussion, etc ...), leaving me with roughly 350 pages at the end of the semester.  As enrollment for the survey rose from the low 20s six years ago (when it was almost entirely a discussion class) to the high 90s last spring, written lectures helped improve class flow, even as they provided students with an additional resource to study for the exam (all lectures were posted on TWEN).  In addition to pedagogical benefits, written lectures also lent themselves to the development of new themes, much as if one were writing a book.  One theme that emerged profoundly was anti-socialism.  Long before Marx, American law steadfastly prevented the redistribution of wealth along egalitarian lines (incidentally, this is how Michael Kazin defines the Left in his new book, American Dreamers: How the Left Changed a Nation (New York: Knopf, 2012)).  Early examples of American law's anti-egalitarian stance were not expressly anti-socialist (see, for example, John Winthrop's Model of Christian Charity or James Madison's Federalist 10), but they worked to maintain inequality nevertheless.  Following the Civil War (which did little to promote equality, just take a look at Jim Downs new book Sick from Freedom: African American Illness and Suffering During the Civil War and Reconstruction (New York: Oxford University Press, 2012)), American law took on socialism in earnest.  This began in the context of criminal syndicalism laws, anti-strike measures, and a complex series of concessions aimed at co-opting labor and preserving inequality.  Prominent legal theorists like Christopher G. Tiedeman railed against socialism, Progressives like Theodore Roosevelt co-opted the Left by decrying monopoly and embracing anti-trust, even as the Supreme Court carved out a complex jurisprudence granting concessions to labor in some contexts (Holden v. Hardy), meanwhile crushing it in others (Lochner v. New York).  Finally, outspoken socialists like Eugene V. Debs, Charles Schenk, Jacob Abrams, and Benjamin Gitlow all found themselves prosecuted and jailed  for espousing socialist views.  Though Kazin argues in American Dreamers that the Left has consistently influenced American politics by developing ideas that were later co-opted by moderates, I find a much more entrenched tradition of anti-egalitarianism in American law.  Even though moderates did co-opt ideas advanced by figures on the Left, conservatives and moderates alike did much to crush any formal socialist politics in the United States.  Indeed, can it really be argued that there even is a Left "left" in America?  Just a thought for Labor Day ...
Posted by Anders Walker at 10:37 AM

First, thanks for having a post on the “s” word here: something rare in the legal blogosphere (unless its by way of repeating ad nauseam the same old tendentious and ill-informed nonsense).

That there is an entrenched anti-egalitarianism in American law is hardly surprising given the predominance of the libertarian strain of Liberalism in this country, at least with regard to economics (‘the basic ethos of US social policy has lone been dominated by rugged laissez-faire individualism and liberal notions of self-help’), which helps account for the fact that our welfare state is characterized as “liberal” rather than, say, social democratic or corporatist (the three main type of capitalist welfare regimes in Western Europe and North America). It also explains why the U.S. welfare state has consistently underperformed its “non-liberal” counterparts with regard to criteria involving the reduction of poverty, the promotion of equality, social integration, social stability, autonomy, and so forth.

As to the history of the Left I would also recommend Richard Flacks’ earlier volume, Making History: The Radical Tradition in American Life (New York: Columbia University Press, 1988) which, I think, in some respects, better than Kazin’s although Dick does, at times, sound like an apologist for the crudely consumptive materialist aspirations that enchant the working class who endeavor to emulate the conspicuous consumption habits of their middle and upper class “betters.” The economy, at any rate, is predicated on the masses feeling an overwhelming need to be indemnified by consumption and possession of as many “goods” (including non-materialist goods, like entertainment) as possible.

While much may hinge on how generously we define “the Left,” I do think there is remains a robust Left tradition in this country (there’s even a ‘religious Left,’ of which I am a proud member*), even if its numbers are small, historically and comparatively speaking. Its influence, I believe, and to some extent this has been true historically as well, is far greater than its numbers would lead one to believe (I’m reminded, for example, of the influence of the late Michael Harrington’s book on the ‘war on poverty’). The Left encompasses not a few radical democrats, most anarchists, communists, socialists, some forms of populism, social democrats, some feminists, some Democrats, some Greens, and so on. It also includes not a few who are Left owing to their religious or spiritual convictions (as in the Catholic Worker movement and among ‘engaged Buddhists,’ to cite just two examples). It is not well identified by any national party or national organization of any kind.

I have a short post on “American socialism” with a brief list of helpful titles, here:
http://ratiojuris.blogspot.com/2012/06/american-style-socialism.html

And I have a post on modest urban experiments in socialism in this country here:
http://ratiojuris.blogspot.com/2011/11/anarchist-inspired-socialist.html

Finally, it should be noted that many of us on the Left still believe May 1 is the true “Labor Day,” on which, see the two links appended to my last May Day post at Ratio Juris here: http://ratiojuris.blogspot.com/2012/05/sundry-reflections-proposals-in.html

"American law steadfastly prevented the redistribution of wealth along egalitarian lines." Pre-Marx? What are you referring to?

Debs's union, for example, strictly prohibited blacks, so any gains for its members would have come at the expense of the poorest group in the country.

If Anders doesn’t mind, I’ll at least address the second remark by Bernstein regarding unions and egalitarian distribution of wealth. As Freeman and Medoff demonstrated some time ago, “the claim that unionism increases inequality is wrong,” indeed, “on the contrary, unionism tends to be in general a powerful force for equalization of earnings in the economy. The claim is wrong not because the effect to which it draws attention—raising wages of some workers at the expense of other workers—does not it occur. It does. The claim is wrong because the increase in inequality induced by monopoly wage effects is dwarfed by three other trade union effects on wages that reduce inequality: union wage policies lower inequality of wages within establishments; union wage policies favor equal pay for equal work across establishments; and union wage gains for blue-collar labor reduce inequality between white-collar and blue-collar workers.” In sum, the inequality-reducing effects trump the inequality-increasing effects of unionism, thus the “voice/response effects of the institution seem to dominate the monopoly wage effects.” Although as Timothy Noah has pointed out, the reduction in inequality is much less dramatic when union membership is a mere 12% of the workforce (and only 7.5% if you leave out public-employee unions). It may be a mere correlation, but it is interesting to note that the precipitous decline in union membership (a decline which began generally with the long-term effects of Taft-Hartley) roughly coincides with the sharp rise in inequality in this country beginning in the late 1970s. Moreover, this calls to mind some earlier historical facts:

“Early in the century, the share of the American workforce which belonged to a union was meager, barely 10 percent. At the same time, inequality was stark—the share of national income going to the richest 10 percent of Americans stood at nearly 40 percent. This gap widened in the 1920s. But in 1935, the New Deal granted workers basic collective bargaining rights; over the next decade, union membership grew dramatically, followed by an equally dramatic decline in income inequality. This yielded an era of broadly shared prosperity, running from the 1940s into the 1970s” (Colin Gordon).

Of course it should also be pointed out that the rise in inequality (as well as at least some of the decline in union membership, which occurred in many other countries as well) was in part due to global economic forces (the latest form of capitalist globalization) that, to some extent, national governments have, alone at least, been unable to affect.

An appropriate historical summary is again provided by Gordon:

“One hallmark of the first 30 years after World War II was the ‘countervailing power’ of labor unions (not just at the bargaining table but in local, state, and national politics) and their ability to raise wages and working standards for members and non-members alike. There were stark limits to union power—which was concentrated in some sectors of the economy and in some regions of the country—but the basic logic of the postwar accord was clear: Into the early 1970s, both median compensation and labor productivity roughly doubled. Labor unions both sustained prosperity, and ensured that it was shared. The impact of all of this on wage or income inequality is a complex question (shaped by skill, occupation, education, and demographics) but the bottom line is clear: There is a demonstrable wage premium for union workers. In addition, this wage premium is more pronounced for lesser skilled workers, and even spills over and benefits non-union workers. The wage effect alone underestimates the union contribution to shared prosperity. Unions at midcentury also exerted considerable political clout, sustaining other political and economic choices (minimum wage, job-based health benefits, Social Security, high marginal tax rates, etc.) that dampened inequality. And unions not only raise the wage floor but can also lower the ceiling; union bargaining power has been shown to moderate the compensation of executives at unionized firms.”

Patrick, thanks again for the thoughtful comment, will take a look at Flacks book. David! Hoped my Lochner comment might catch your attention. Two documents that come to mind are Winthrop's Model of Christian Charity and the U.S. Constitution!

I admit my ignorance of Winthrop, but the U.S. Constitution doesn't prevent states from doing anything except abrogating existing contracts. Maybe state constitutions had more severe provisions (and I suppose they mostly enforced just compensation requirements from Takings under their state constitutions), but there was surely nothing in the federal constitution prohibiting, say, a 90% state income tax rate, state ownership of railroads and other important businesses and other socialistic measures. (Come to think of it, there was one federal constitutional provision that likely did retard socialistic measures: the privileges and immunities clause, which meant that capital and labor were mobile).

By the way, I took a look at American Dreamers. Kazin identifies Frederick Douglass, and abolitionism in general, with "the Left." It's hard to characterize historical figures with terms you use for modern purposes, but Kazin seems to be identifying the left as including any social movement that he thinks seems admirable in retrospect.

David, point taken on Kazin. Let me press you on the Constitution. While you are right there is nothing expressly forbidding states from redistributing wealth in the federal constitution, was not the redistribution of wealth something that the founders opposed? Return for a minute to Madison's mention of wealth redistribution as a "wicked project" in Federalist 10, what, to your mind, lay behind this statement?

Yes, and the federal government was given very little authority that could be used for wealth distribution. But we had preexisting states, and that's where most of the fiscal and regulatory action was for quite some time, especially if we're talking about pre-Karl Marx times.