I think the theme for this year is:  pity the poor book prize committees.  There are so many wonderful books coming out, how is one to choose?

The latest to cross my desk (a 2010 publication -- I'm catching up!), is David Garland,  Peculiar Institution:  America's Death Penalty in an Age of Abolition, with a review from Justice Stevens.  Here's the book description: 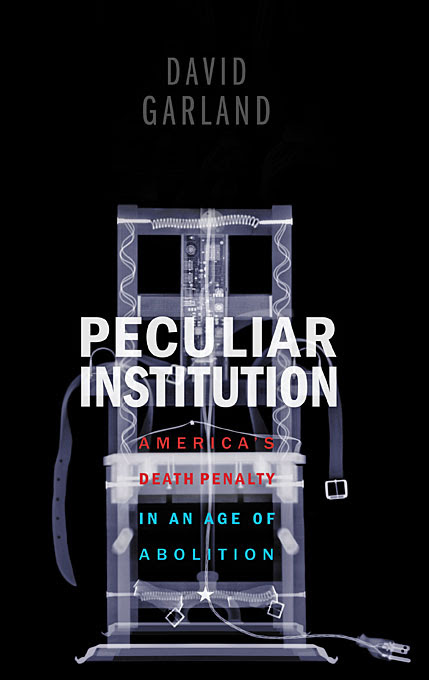 The U.S. death penalty is a peculiar institution, and a uniquely American one. Despite its comprehensive abolition elsewhere in the Western world, capital punishment continues in dozens of American states– a fact that is frequently discussed but rarely understood. The same puzzlement surrounds the peculiar form that American capital punishment now takes, with its uneven application, its seemingly endless delays, and the uncertainty of its ever being carried out in individual cases, none of which seem conducive to effective crime control or criminal justice. In a brilliantly provocative study, David Garland explains this tenacity and shows how death penalty practice has come to bear the distinctive hallmarks of America’s political institutions and cultural conflicts.

America’s radical federalism and local democracy, as well as its legacy of violence and racism, account for our divergence from the rest of the West. Whereas the elites of other nations were able to impose nationwide abolition from above despite public objections, American elites are unable– and unwilling– to end a punishment that has the support of local majorities and a storied place in popular culture.

In the course of hundreds of decisions, federal courts sought to rationalize and civilize an institution that too often resembled a lynching, producing layers of legal process but also delays and reversals. Yet the Supreme Court insists that the issue is to be decided by local political actors and public opinion. So the death penalty continues to respond to popular will, enhancing the power of criminal justice professionals, providing drama for the media, and bringing pleasure to a public audience who consumes its chilling tales.

Garland brings a new clarity to our understanding of this peculiar institution– and a new challenge to supporters and opponents alike.

A snippet from Justice Stevens' review:


“Some of [Garland’s] eminently readable prose reminds me of Alexis de Tocqueville’s nineteenth-century narrative about his visit to America; it has the objective, thought-provoking quality of an astute observer rather than that of an interested participant in American politics...In his view, an important reason Americans retain capital punishment is their fascination with death. While neither the glamour nor the gore that used to attend public executions remains today, he observes, capital cases still generate extensive commentary about victims’ deaths and potential deaths of defendants. Great works of literature, like best-selling paperbacks, attract readers by discussing killings and revenge. Garland suggests that the popularity of the mystery story is part of the culture that keeps capital punishment alive...While he has studiously avoided stating conclusions about the morality, wisdom, or constitutionality of capital punishment, Garland’s empirical analysis speaks to all three...I commend Peculiar Institution to participants in the political process.”—John Paul Stevens, New York Review of Books


“This is indispensable reading for students of criminal justice, race, and American culture, for lawyers and judges in the pathways of death, and for all who want to understand why our country can neither put capital punishment to any good use nor put an end to it.”—Anthony G. Amsterdam, University Professor and Professor of Law, New York University

“Peculiar Institution provides the best explanation I have ever read as to why the United States, alone among western democracies, retains the death penalty, and why we have the odd system we do, in which a very small percentage of the people sentenced to death are actually executed.”—Stuart Banner, author of American Property

“Peculiar Institution tells a fascinating and important story that illuminates why the death penalty is so problematic and yet so well suited to American practices.”—Austin Sarat, author of When the State Kills: Capital Punishment and the American Condition