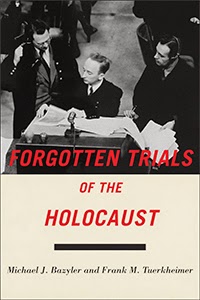 In the wake of the Second World War, how were the Allies to respond to the enormous crime of the Holocaust? Even in an ideal world, it would have been impossible to bring all the perpetrators to trial. Nevertheless, an attempt was made to prosecute some. Most people have heard of the Nuremberg trial and the Eichmann trial, though they probably have not heard of the Kharkov Trial—the first trial of Germans for Nazi-era crimes—or even the Dachau Trials, in which war criminals were prosecuted by the American military personnel on the former concentration camp grounds.

This book uncovers ten “forgotten trials” of the Holocaust, selected from the many Nazi trials that have taken place over the course of the last seven decades. It showcases how perpetrators of the Holocaust were dealt with in courtrooms around the world—in the former Soviet Union, the United Kingdom, Israel, France, Poland, the United States and Germany—revealing how different legal systems responded to the horrors of the Holocaust. The book provides a graphic picture of the genocidal campaign against the Jews through eyewitness testimony and incriminating documents and traces how the public memory of the Holocaust was formed over time.

The volume covers a variety of trials—of high-ranking statesmen and minor foot soldiers, of male and female concentration camps guards and even trials in Israel of Jewish Kapos—to provide the first global picture of the laborious efforts to bring perpetrators of the Holocaust to justice. As law professors and litigators, the authors provide distinct insights into these trials.

“Provides an exceptionally clear, fair-minded, and helpful discussion of the efforts of far-flung jurists to bring perpetrators of the Holocaust to justice. Bazyler and Tuerkheimer bring impressive scholarly acumen and hardboiled lawyerly insight to the task of assessing the successes and shortcomings of trials that sought to submit the most unspeakable crimes to legal judgment."

"Brings to the reader important trials that have fallen beneath the general public’s radar. The authors, as both academics and practicing lawyers, bring a fresh and incisive approach to these trials, dissecting the strategies of the trial lawyers as well as the decision-making by the presiding judges. They manage, in each of these trials, to focus on the defendants, the victims, and the players in the courtroom scene. They present a vivid picture of the holocaust in operation, an essential undertaking as the surivivor generation decreases in number. This book is worth reading for anyone interested in trials and for anyone interested in the Holocaust, and it is compelling reading for anyone interested in both."

"Takes the reader on a journey across nearly six decades, seven countries, and ten different judicial settings to examine a wide variety of ways in which attempts were made to bring Holocaust perpetrators to justice. The authors do not shy from assessing the strengths, weaknesses, and difficulties of each trial and the degree to which justice was served. An important contribution to the history of the judicial aftermath of the Holocaust."

"An invaluable book about significant trials conducted by the United States, certain European countries, and Israel against German government officials, military officers, and non-German collaborators for the Holocaust. It will  educate, expand, and enlighten every reader's knowledge about one of the most tragic events in human history, perpetrated by one of the most culturally, medically, scientifically, artistically and politically advanced civilizations the world has ever known. Bazyler and Tuerkheimer have made a most significant contribution to the study of the Holocaust, and the world's response."

"For too long, lawyers and legal academics have relegated the Shoah to the margins and shadows of legal discourse. The killing of six million European Jews has either been treated as an extraordinary and unique circumstance beyond law, or more recently, as little more than a precursor event to the development of international criminal law. Michael J. Bazyler and Frank M. Tuerkheimer have rendered an invaluable service to legal practice and scholarship by bringing the Holocaust to the center of the legal profession and discipline. This extraordinary book, by examining the intersections and encounters between law and the Shoah in a number of jurisdictions, across a significant time period, makes it impossible for us to ignore or forget the intimate and complex relationship between law and the Holocaust."

—David Fraser, author of Law After Auschwitz: Towards a Jurisprudence of the Holocaust

"Provides lucid summaries of ten lesser known trials of participants in Nazi war crimes, along with acute and balanced conclusions about the legal legitimacy and legacy of each proceeding. The authors bring fresh and illuminating perspectives to a matter of urgent concern: understanding how the claims of law and justice should interact in the aftermath of atrocity."