(In keeping with an approach that I am trialling at the moment, and the looser format provided by a blog, I have decided to include some pictures; these are intended to complement the text, rather than to illustrate it, and as such, they are left uncaptioned. All of the images are either in the public domain, or have been permitted for non-commercial reproduction.)

I did my PhD at Birkbeck, one of the smaller colleges of the University of London, which has its main campus in Bloomsbury, just off Russell Square. In 2012, I was piqued by a story in the Evening Standard which reported that the local council there, to the annoyance of many residents, had removed many of the double yellow lines from the area. In England, double yellow lines at the side of the road mean “no parking at any time” – they are a routine aspect of drivers’ visual literacy. Yet while the council had removed the lines, they had continued to keep the stringent parking restrictions in place on these streets. Some motorists were thus enraged to find that they had incurred a fine for parking illegally, even though there was no obvious signage. As one said, ‘[This was] simply not an acceptable thing to do…enforcing laws that no one can see are there.’

That comment stuck with me because at the time I was thinking about the relationship between law and the landscape in late-medieval England, a society in which it was self-evident that law was something you should be able to see. Rights of way and obligations of maintenance were invested in roads and bridges, ditches and rivers; trees or hedges were planted to serve as long-lasting markers in property disputes; and people played a kind of legal ‘tag’ with a post placed in the middle of a parlour to denote the boundary of a sanctuary. The physical environment, both rural and urban, was shot through with rival claims. And jurors and witnesses were frequently asked to rehearse what they knew about it: to recite the customary boundaries of the parish, or adjudge where a communal gutter became the responsibility of a particular neighbour. They too would have been aghast at the notion of ‘invisible law’.

Most legal history has treated law as something that, if not invisible, inheres in the minds of lawyers and litigants, the texts of jurisprudence, or the social processes of dispute resolution. But a recent wave of work by scholars such as Irus Braverman, Alain Pottage, and Catherine Mawani has suggested that we might consider law in the contemporary world as having a physical presence, a materiality. David Delaney, a Legal Geographer, has used the example of the barbed-wire fence as what he calls ‘a materialization of the legal’, a physical iteration of the right to exclude that inheres in property. Drawing such insights into conversation with medieval evidence, I have written about the complex legal regimes surrounding shipwreck and the way that flotsam and jetsam were materialized as legitimate property, and how environmental change could disrupt the jurisdictional boundaries that depended on the landscape. 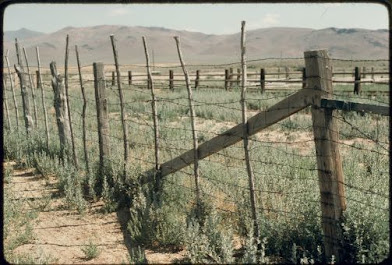 Claiming that law is, and perhaps has always been ‘material’ requires a dramatic shift of perspective in how we understand law and its history: it refuses law’s claims to be an intellectual discourse (and can explore how such boundary-policing takes place), it binds law closely to its physical consequences – to shackles, prisons, and executions, to pain and power – and it opens up the possibility that ‘doing’ law can consist not just in social and cultural processes, but in material actions, networks, and infrastructures. It is thus very timely, because of the way it allows us to connect up legal institutions with ecology (understood in its very broadest sense) in our moment of climate crisis, allowing historians to develop an account of how law has, quite literally, shaped the world in which we live.

For all its excitement and radical potential, however, reframing law in this way also raises some difficult questions. To begin with, it must be admitted that claims of law’s materiality are not intuitive. This is perhaps not a very rigorous objection, and perhaps in an era of machine learning and bioengineering, the idea that mind and matter, word and world are ontologically one and the same will seem much more obvious to the next generation of scholars. But for historians in particular, it suggests two other problems. First, we still do not have a good account of how and why law has been ‘dematerialized’: if it is in fact a material phenomenon, why have people for so long insisted that it is not? Or to put it another way, why does it take the removal of law’s visible signs – the double yellow lines – for us to realize that it is something that we can see?

And second, concomitantly, how do we differentiate between the materiality of the law made in courtrooms and the materiality of the law that subsists in street-signs or barbed wire fences? Materiality is a capacious concept, carving out the categorical space which it is attempting to undermine; since everything, in one view, is material (even the faintest figments of our imaginations are the product of neurons and synapses), it does not in itself provide us with a direction for analysis. To say that law is ‘material’, therefore, is not enough. We need to understand the processes by which legal meaning is invested and maintained through things. How can we account for the way that legal power – at least in western European contexts – seems to crystallize in some objects and spaces rather than others? One answer, I think, is to look at law’s own account of its materiality, the power that it accords to text. It is to this idea I will turn in my next post.