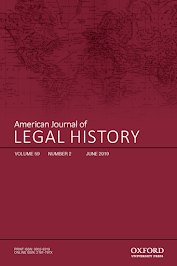 American Journal of Legal History 60: 3 (September 2020) has been published.

The Southern and Western Prehistory of “Liberty of Contract”: Revisiting the Path to Lochner in Light of the New History of American Capitalism
Gabrielle E Clark