I thank Mary Dudziak for the invitation to participate in this discussion, though I find myself a bit perplexed about how to respond to Wood's review. On the one hand, I am deeply grateful for his summary of my findings in such an august venue. He is right to notice that my 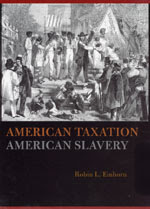 sense of the tragedy of American history is different from his and to locate the radicalism of my view where he has: in my outright rejection of the idea that the slaveholding politicians of the early republic were the champions of liberty and democracy they pretended to be.

We all know that this is how scholarship works, and I fully expect it to happen to me down the line. The method that I have fought to establish, along with other members of my generation of historians, is an institutional -- rather than ideological -- approach to political history. We find what people did in the political realm to be far more significant than what they wished they had done or hoped others would eventually do, and we find the best evidence of what they did in the structure and operation of their political institutions. We define political history as the story of what people did in politics, generally leaving the analysis of their rhetoric to the intellectual and cultural historians. And, increasingly, we are finding that our attention to institutions is shoving slavery toward the center of our interpretations of American political development.

Thus, my own work is about liberty and democracy as they did (and did not) exist in real times and places -- rather than about the rhetoric of liberty and democracy. Most important, my work is about taxes. Wood says little about what I hope will be the principal scholarly contribution of American Taxation: the research that enabled me to reconstruct and describe the misunderstood, forgotten, and in some cases simply unknown tax policies and debates of early American history. My interpretations of these policies and debates certainly will not be the last word on them, but I have tried to place them onto the table for scholars to consider when thinking about the political, constitutional, and legal -- and perhaps even the intellectual and cultural -- history of the United States.
Posted by Mary L. Dudziak at 6:35 PM