THE ASCENT OF MONEY: A Financial History Of the World by Niall Ferguso

shows how promises and paper have lifted humans from subsistence farmers in Babylon to Masters of the Universe on Wall Street.

Among his core arguments is that "poverty is not the result of rapacious financiers exploiting the poor. It has much more to do with the lack of financial institutions, with the absence of banks, not their presence." Money, he contends, is essential to human progress; it is "trust inscribed" on paper or metal, and without that trust we would all be poorer.

THE GREAT INFLATION AND ITS AFTERMATH: The Past and Future of American Affluence by Robert J. Samuelson (Random House) is taken up in the New York Times by Noam Scheiber. For this writer, "the villain...is a group of intellectuals who came into fashion during World War II, then came into power with the Kennedy administration." Scheiber argues that "Samuelson is right to highlight inflation’s central role in economic history," but the author's story is "incomplete. Over the last decade, American policy makers — Alan Greenspan chief among them — came under the sway of the same old siren song: the belief that rational economic management could avert the pain of unemployment. And yet, the same pathologies Samuelson so shrewdly diagnoses in an earlier generation he almost com­pletely ignores today."
The rest is here.
Kennedy era foreign policy is explored in LESSONS IN DISASTER: McGeorge B 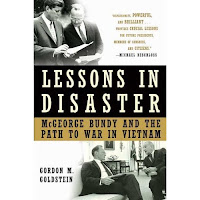 undy and the Path to War in Vietnam by Gordon M. Goldstein (Times Books/ Henry Holt & Company), reviewed today in the NY Times by Richard Holbrooke. In this "unusual book, Bundy emerges as the most interesting figure in the Vietnam tragedy — less for his unfortunate part in prosecuting the war than for his agonized search 30 years later to understand himself." Bundy was "one of the primary architects and defenders of the war. The columnist Joseph Kraft, a friend of Bundy’s, once described him as 'a figure of true consequence' and 'perhaps the only candidate for the statesman’s mantle to emerge in the generation that is coming to power.'"
Holbrooke finds Goldstein's account "a compelling portrait of a man once serenely confident, searching decades later for self-understanding." Continue reading here.
RÉSISTANCE: A Woman's Journal of Struggle and Defiance in Occupied France by Agnès H

umbert, translated from the French by Barbara Mellor (Bloomsbury) is reviewed in the Washington Post by Tobias Grey. Grey writes,

With thrilling immediacy, Humbert's book guides us through the first stumbling steps of what became known as the Musée de l'Homme roup, a disparate cell of writers, linguists, historians and social gadflies led by a charismatic Polish ethnographer, Boris Vildé. The cell's greatest achievement, before it was broken up by the Nazis in April 1941, was to publish and deliver five editions of a four-page broadsheet newspaper called, naturally, "Résistance." The paper's main aim was to counter Nazi propaganda, notably by providing evidence that food shortages in France were being caused not by the British blockade but by wholesale looting by the Germans.

More than 60 years after it was first published, Humbert's book, one of the first memoirs of the war to enter the public domain, has finally been translated into English. It was worth the wait.

Children of the Revolution: The French, 1799-1914 by Robert Gildea is reviewed in The Nation by Ruth Scurr, who finds it an "erudite account of France's long 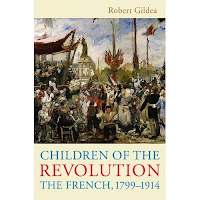 Gildea's book shows the internecine struggle there had been in France throughout the nineteenth century to secure the Republic and unify the nation, an effort that would culminate in the monumental sacrifice demanded by the Great War. That so many young men were prepared to die for a vision of France that was relatively new, and essentially contested, is testimony to the deep complexities of patriotism and the nation-state. Gildea assembles a wealth of information--historical, political, cultural and economic--to elucidate the conundrum, without pretending to explain it away. It is impossible to interpret the slaughter of a million and a half people as a triumph in any setting, but Gildea shows unforgettably a national identity winning out against all odds. It's a lengthy, complex saga, but he manages to sustain enough buoyancy in his prose to allow it to be read from beginning to end with interest and pleasure.

The rest (subscription required) is here.

SWEET LAND OF LIBERTY: The Forgotten Struggle for Civil Rights in the North by Thomas J. Sugrue (Random House) is reviewed by Joseph Rosenbloom in the Boston Globe. "Sugrue sets out to debunk 'the tired clichés of recent books that fixate on the 1960s as the fundamental turning point in the history of race in modern America.," writes Rosenbloom.

His exhaustively researched account demonstrates that Northern activists achieved critical breakthroughs in the cause of African-American economic and political equality....Sugrue's scholarship is most impressive in his analysis of the social, economic, and political currents that swirled around the activists.