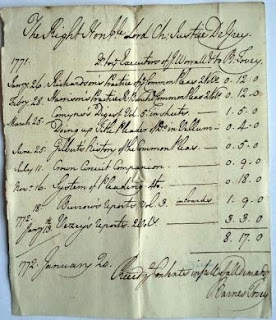 One of the best, though also of course sometimes one of the worst, parts of being a legal historian is that you get to work in archives if you want. A few years ago I spent a month in the archives of the seventeenth-century commercial court of Lyon. No matter how hard I stared, I could not get the squiggles on the page to resolve themselves into letters. A year of paleographical training would probably have helped, I know, but that was not a pleasant experience. By contrast, I have recently been working in English archives on eighteenth-century material, and that is an altogether different thing. One completely fortuitous archival discovery has just metamorphosed into an article. I was working in the archive of William de Grey in Norwich, England. De Grey was chief justice of the Court of Common Pleas when William Blackstone was on that court, and I was researching a paper on Blackstone as a judge. With about 45 minutes left before the archive closed, I got to the multiple bundles of receipts and accounts de Grey had kept while on the bench. As I flipped through them quickly, looking for entries relevant to Blackstone, I noticed many book purchase receipts. Since de Grey’s opinions were rather erudite, I thought this was interesting and decided to take a photograph of the next receipt I saw so that I could drop in a footnote to the effect that de Grey was a bibliophile. When, two weeks later and back in the U.S., I actually looked at the receipt I had photographed (reproduced here from the Norfolk Record Office WLS LV/10/25), I discovered that it recorded the law books de Grey had purchased his first year on the bench, including the elementary book on Common Pleas procedure that he bought the day he took the oath of office. I next realized that de Grey had never practiced before the court to which he had just been appointed. So apparently one of the first things he did was go out and buy a nutshell that would tell him how his new court's procedure worked. That receipt, along with about 47 others, his library catalogues, his annotated Introduction to the Law Relative to Trials at Nisi Prius by Francis Buller, some commonplace books, and his bench notebook, ended up becoming a paper entitled The Judicial Education of William de Grey. Tomorrow, I am going to blog a bit more about this paper, and then I am going to write a series of posts about the few tips and tricks I have learned for working in archives.
Posted by Emily Kadens at 1:38 PM