Reece on Aucoin's "Rift in the Clouds"

Reconstruction's Children is an H-Law Review by Lewie Reece, Anderson University, of Brent J. Aucoin's A Rift in the Clouds: Race and the Southern Federal Judiciary 1900-1910 (Fayetteville: University of Arkansas Press, 2007). It commences: 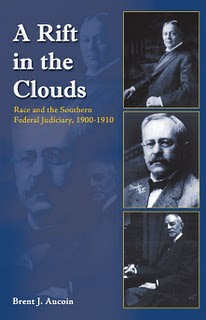 Reconstruction ushered in a tremendous social, political, and constitutional revolution that profoundly reshaped American society and culture. Nevertheless, within a generation the American people proved unwilling to sustain a commitment to racial equality. Through the tactics of violence, force, and fraud, Southern Democrats returned to power, and it appeared that Reconstruction's gains were illusory at best. While throughout the 1880s Republicans attempted to stem the racist tide, in the end, their efforts failed. By 1900, southern states were completing the racial and class-based disfranchisement of both African Americans and poor whites.

That was bad enough, but American society in the early 1900s was also deeply committed to the guiding principles of white supremacy. This was in no stretch of the imagination limited to the South. Americans as a society firmly approved of disfranchisement as well as lynching and the segregated racial order. Not only was the Reconstruction effort to craft constitutional racial equality considered a critical error, but in many ways efforts at emancipation itself were deemed erroneous too. The justification of white supremacy was propounded for an enthusiastic audience in a vast array of social scientific literature, law review articles, magazines, and newspapers.

In such an environment, those who dissented from the dominant racial milieu were marginal figures. Yet the fact is that an alternative critique of race relations not only survived those years but also created new legal and social institutions to combat racism. It was this very era that saw the creation of such groups as the Constitution League, the National Association for the Advancement of Colored People (NAACP), the National Urban League, and later the Association of Southern Women for the Prevention of Lynching. The triumph of the civil rights movement was far into the future, but in many ways the seedtime of the freedom struggle was not the 1930s but the racist climate of the Progressive Era. In many ways, historians have failed to see the continuities of action by civil rights activists that saw a century of struggle.

Brent J. Aucoin's brief book thus tells an important, and one could even argue a central, event in the history of the civil rights movement. His focus is on three southern judges who served on the federal district bench: Jacob Treiber, Emory Speer, and Thomas Jones. As a group, they offer an interesting insight into the world of nineteenth-century southern white dissent.

The Law & Politics Book Review, by Dante Gatmaytan-Magno, University of the Philippines College of Law, is here.
Posted by Dan Ernst at 1:25 AM