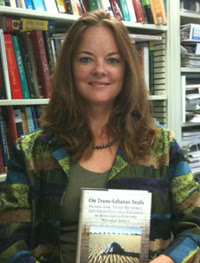 The review, published on H-Levant, is by Mohamed Hassan Mohamed (University of Windsor). Here's the first paragraph:

In their discourse on the network of trade linking the historic Maghrib and Bilad al-Sudan, Africanists tend to emphasize the “trans” in trans-Saharan trade. The Sahara often comes across as a barrier between what Hegel dubbed “European Africa” (north) and “Africa proper” (south). Anglophone scholars often “skip” the Sahara and posit the Maghrib mainly as a depot for the gold and slaves the caravans had picked up from its African beyond. Change and continuity are conceived in terms of decrease in the quantity of gold shipments and increase in the volume of slaves heading northward. To account for the disparity between the small number of Africans in the Maghrib and the projected increase in the volume of slave shipments, Africanists invoke miscegenation to turn “mixed” communities into signs of descent from African slaves. The situation is complicated by the standard complaint about the lack (or dearth) of local sources, often an alibi for the elevation of accounts by modern European travellers and consuls to authorities on what caravan traders were up to. Against this backdrop, Ghislaine Lydon’s On Trans-Saharan Trails is a welcome addition to Anglophone literature on northwest Africa.

Law appears to figure most strongly in the last three chapters, on "the culture behind the caravan trade network." From Mohamed --

In the absence of centralized states, traders utilized a variety of strategies to minimize the risks of trading in cross-cultural settings including partnership and a wide range of paper contracts. The efficacy of such arrangements, however, was contingent on the omnipresence of judges, clerics, and muftis who served as guardians of Muslim ethics of trade. According to Lydon, “documents such as contracts were not considered official legal instruments in Islamic law” (p. 293).

The rest of the review is here. The book's TOC is available here.

Image credit
Posted by Karen Tani at 10:00 AM