The Upside-Down Constitution (Harvard University Press), by Michael S. Greve, is the subject of an entertaining new review in the Law & Politics Book Review. "Perhaps you, like Keanu Reeves in the film The Matrix, sit at your desk each day with the vague impression that something about the world is deeply wrong," begins reviewer James A. Gardner (SUNY Buffalo), "but you cannot quite put your finger on the problem." 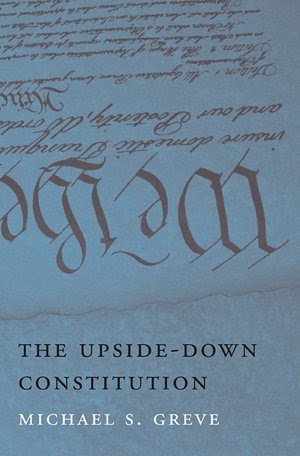 
Michael Greve, the John Searle Scholar at the American Enterprise Institute, would like to be your Morpheus. In this sprawling, idiosyncratic, and often frustrating book, Greve reveals The Truth: the problem, at least in the United States, is federalism, which has not merely run off the rails, but has become literally inverted, promoting what it was designed to prevent, and preventing what it was designed to promote. In a book that aspires to be simultaneously a work of political economy, constitutional history, and doctrinal critique, and that along the way also attempts a biting, corrective intervention into contemporary conservative constitutional theory, Greve explains how true federalism’s demise, and its replacement with an imposter, has caused such misery.

Read on here. The book's TOC is available here.
Posted by Karen Tani at 4:00 AM