New Release: Daniels, "The Japanese American Cases: The Rule of Law in Time of War"

If, like me, you teach the Japanese American internment cases (or have a personal connection to this history), you'll want to check out the most recent addition to the Landmark Law Cases & American Society series from the University Press of Kansas: The Japanese American Cases: The Rule of Law in Time of War (2013), by Roger Daniels. Here's a description from the Press: 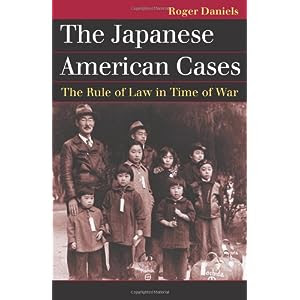 After Pearl Harbor, President Roosevelt, claiming a never documented "military necessity," ordered the removal and incarceration of 120,000 Japanese Americans during World War II solely because of their ancestry. As Roger Daniels movingly describes, almost all reluctantly obeyed their government and went peacefully to the desolate camps provided for them.

Daniels, however, focuses on four Nisei, second-generation Japanese Americans, who, aided by a handful of lawyers, defied the government and their own community leaders by challenging the constitutionality of the government's orders. The 1942 convictions of three men--Min Yasui, Gordon Hirabayashi, and Fred Korematsu--who refused to go willingly were upheld by the Supreme Court in 1943 and 1944. But a woman, Mitsuye Endo, who obediently went to camp and then filed for a writ of habeas corpus, won her case. The Supreme Court subsequently ordered her release in 1944, following her two and a half years behind barbed wire.

Neither the cases nor the fate of law-abiding Japanese attracted much attention during the turmoil of global warfare; in the postwar decades they were all but forgotten. Daniels traces how, four decades after the war, in an America whose attitudes about race and justice were changing, the surviving Japanese Americans achieved a measure of political and legal justice. Congress created a commission to investigate the legitimacy of the wartime incarceration. It found no military necessity, but rather that the causes were "race prejudice, war hysteria, and a failure of political leadership." In 1982 it asked Congress to apologize and award $20,000 to each survivor. A bill providing that compensation was finally passed and signed into law in 1988.

There is no way to undo a Supreme Court decision, but teams of volunteer lawyers, overwhelmingly Sansei--third-generation Japanese Americans--used revelations in 1983 about the suppression of evidence by federal attorneys to persuade lower courts to overturn the convictions of Hirabayashi and Korematsu.

Daniels traces the continuing changes in attitudes since the 1980s about the wartime cases and offers a sobering account that resonates with present-day issues of national security and individual freedom.


"Daniels has a well-deserved reputation as a leading historian on this subject. Here, he ably recounts the legal challenges to their internment by four young Japanese Americans, which resulted in Supreme Court decisions that still provoke debate and denunciation. He also brings this story up to date with accounts of the successful effort in the 1980s to vacate their criminal convictions and promote 'redress and reparations' on behalf of all victims. This book is a timely reminder of a shameful episode in American history."--Peter Irons, author of Justice at War: The Story of the Japanese-American Internment Cases

"In this revealing study, Daniels demonstrates how seemingly ordinary people asserted their constitutional rights against all odds. He analyzes judicial opinions and unearths internal divisions among government officials and conflicts among lawyers representing both sides. A must-read for all concerned with justice in America."--Eileen H. Tamura, author of In Defense of Justice: Joseph Kurihara and the Japanese American Struggle for Equality