Out in the Cambridge Historical Studies in American Law and Society, edited by Christopher Tomlins, is Recalibrating Reform: The Limits of Political Change, by Stuart Chinn, University of Oregon School of Law. Here is a summary: 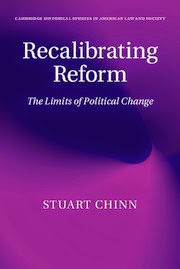 Some of the most important eras of reform in U.S. history reveal a troubling pattern: often reform is compromised after the initial legislative and judicial victories have been achieved. Thus Jim Crow racial exclusions followed Reconstruction; employer prerogatives resurged after the passage of the Wagner Act in 1935; and after the civil rights reforms of the mid-twentieth century, principles of color-blindness remain dominant in key areas of constitutional law that allow structural racial inequalities to remain hidden or unaddressed. When momentous reforms occur, certain institutions and legal rights will survive the disruption and remain intact, just in different forms. Thus governance in the postreform period reflects a systematic recalibration or reshaping of the earlier reforms as a result of the continuing influence and power of such resilient institutions and rights. Recalibrating Reform examines this issue and demonstrates the pivotal role of the Supreme Court in postreform recalibration.

"'Recalibrating Reform' is an illuminating work on the role of the U.S. Supreme Court in social change. Stuart Chinn examines the aftermath of reform in the areas of race and labor, arguing that when the court takes up the intersection between new norms and preexisting legal frameworks, it narrows reform to negotiate between prior laws and the new regime. The court's effort to manage legal tension, Chinn argues, limits the possibilities of reform through courts. An original and important contribution."
Mary L. Dudziak, Asa Griggs Candler Professor of Law and the Director of the Project on War and Security in Law, Culture and Society at Emory University

"This ambitious book makes a substantial contribution to our understanding of the role of the Supreme Court in American political development. Stuart Chinn has given us our first sustained exploration of the institutional dynamics of retrenchment and accommodation between old and new and conservative and liberal legal-constitutional orders. With great synthetic power and brilliant narrative detail, Chinn shows us how the court recurrently steps in to manage these clashes and fashion the new rules of the game."
William E. Forbath, Lloyd M. Bentsen Chair in Law and Professor of History, University of Texas at Austin

TOC after the jump:
Table of Contents

11. Conclusion
Acknowledgements
Bibliography
Posted by Dan Ernst at 9:30 AM