New Release: Blanck on "Forging an American Law of Slavery in Revolutionary South Carolina and Massachusetts"

New from the University of Georgia Press: Tyrannicide: Forging an American Law of Slavery in Revolutionary South Carolina and Massachusetts, by Emily Blanck (Rowan University). The Press explains: 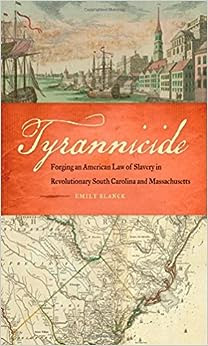 Tyrannicide uses a captivating narrative to unpack the experiences of slavery and slave law in South Carolina and Massachusetts during the Revolutionary Era. In 1779, during the midst of the American Revolution, thirtyfour South Carolina slaves escaped aboard a British privateer and survived several naval battles until the Massachusetts brig Tyrannicide led them to Massachusetts. Over the next four years, the slaves became the center of a legal dispute between the two states. The case affected slave law and highlighted the profound differences between how the “terrible institution” was practiced in the North and the South, in ways that would foreground issues eventually leading to the Civil War.

Emily Blanck uses the Tyrannicide affair and the slaves involved as a lens through which to view contrasting slaveholding cultures and ideas of African American democracy. Blanck’s examination of the debate analyzes crucial questions: How could the colonies unify when they viewed one of America’s foundational institutions in fundamentally different ways? How would fugitive slaves be handled legally and ethically? Blanck shows how the legal and political battles that resulted from the affair reveal much about revolutionary ideals and states’ rights at a time when notions of the New Republic—and philosophies about the unity of American states—were being created.


"Sixty years before the Amistad case forced a nation to confront the vast gulf between its pretensions to liberty and the harsh reality of human bondage, a now-forgotten affair strained the tenuous bonds that held the young republic together. When the brig Tyrannicide captured thirty-four Carolina slaves who had escaped to a British privateer, the ensuing case raised troubling issues of what freedom meant in the postcolonial world. Emily Blanck deftly combines high drama with exhaustive research in this rich and important study."
—Douglas R. Egerton