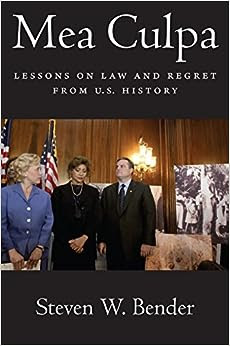 In Mea Culpa, Steven W. Bender examines how the United States’ collective shame about its past has shaped the evolution of law and behavior. We regret slavery and segregationist Jim Crow laws. We eventually apologize, while ignoring other oppressions, and our legal response to regret often fails to be transformative for the affected groups. By examining policies and practices that have affected the lives of groups that have been historically marginalized and oppressed, Bender is able to draw persuasive connections between shame and its eventual legal manifestations. Analyzing the United States’ historical response to its own atrocities, Bender identifies and develops a definitive moral compass that guides us away from the policies and practices that lead to societal regret.

Mea Culpa challenges its readers. In a different era, might we have been slave owners or proprietors of a racially segregated establishment? It’s easy to judge immorality in the hindsight of history, but what current practices and policies will later generations regret?

More than a historical survey, this volume offers a framework for resolving some of the most contentious social problems of our time. Drawing on his background as a legal scholar, Bender tackles immigration, the death penalty, the war on terror, reproductive rights, welfare, wage inequity, homelessness, mass incarceration, and same-sex marriage. Ultimately, he argues, it is the dehumanization of human beings that allows for practices to occur that will later be marked as regrettable. And all of us have a stake in standing on the side of history that resists dehumanization.

"A fascinating book that explores how American government has come to adopt policies that it regards in hindsight with great regret. Bender does a superb job of exploring both historical and current regrettable decisions and shows that they are all based on dehumanizing others. He offers a path forward based on a law founded on compassion. Through powerful examples and clear writing, Bender has written a book that is profound in its observations and conclusions and that deserves a wide readership."
—Erwin Chemerinsky