Franke on the Perils of Marriage Equality

New from New York University Press: Wedlocked: The Perils of Marriage Equality (November 2015), by Katherine Franke (Columbia University). A description from the Press: 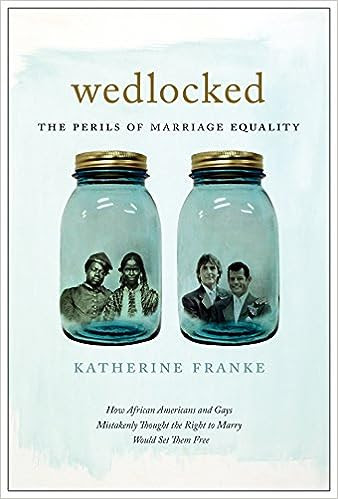 The staggering string of victories by the gay rights movement’s campaign for marriage equality raises questions not only about how gay people have been able to successfully deploy marriage to elevate their social and legal reputation, but also what kind of freedom and equality the ability to marry can mobilize.
Wedlocked turns to history to compare today’s same-sex marriage movement to the experiences of newly emancipated black people in the mid-nineteenth century, when they were able to legally marry for the first time.  Maintaining that the transition to greater freedom was both wondrous and perilous for newly emancipated people, Katherine Franke relates stories of former slaves’ involvements with marriage and draws lessons that serve as cautionary tales for today’s marriage rights movements.  While “be careful what you wish for” is a prominent theme, they also teach us how the rights-bearing subject is inevitably shaped by the very rights they bear, often in ways that reinforce racialized gender norms and stereotypes. Franke further illuminates how the racialization of same-sex marriage has redounded to the benefit of the gay rights movement while contributing to the ongoing subordination of people of color and the diminishing reproductive rights of women.
Like same-sex couples today, freed African-American men and women experienced a shift in status from outlaws to in-laws, from living outside the law to finding their private lives organized by law and state licensure. Their experiences teach us the potential and the perils of being subject to legal regulation: rights—and specifically the right to marriage—can both burden and set you free.


"Wedlocked is a brilliantly conceived cautionary tale of the risks of securing a ‘freedom to marry.’ Drawing upon original research into the complications that marriage rights carried for slaves freed in the 1860s, Katherine Franke warns that marriage rights are not the unalloyed triumph for gay people and same-sex couples that the Supreme Court and virtually all commentators have claimed. Anyone interested in gay marriage should read this book—but so should anyone concerned about the stubborn perseverance of racism in America. For those who appreciate irony, compare this fascinating book with Justice Thomas’s skeptical dissent in the recent marriage equality cases.”—William N. Eskridge Jr.

“A provocative intervention into legal and cultural debates concerning same-sex marriage. Plumbing the well-known analogy between race and sexual orientation in new ways, Wedlocked offers a clear-eyed meditation on the traps and tripwires that marriage, as a highly regulative and deeply gendered legal construct, imposes on non-normative communities. With compelling stories, the book takes on the tenets and truisms of same-sex marriage proponents in startling ways. A real conversation-starter.”
—Martha Umphrey