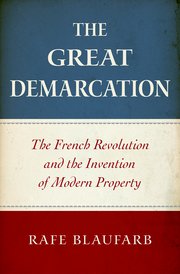 What does it mean to own something? What sorts of things can be owned, and what cannot? How does one relinquish ownership? What are the boundaries between private and public property? Over the course of a decade, the French Revolution grappled with these questions. Punctuated by false starts, contingencies, and unexpected results, this process laid the foundations of the Napoleonic Code and modern notions of property.

As Rafe Blaufarb demonstrates in this ambitious work, the French Revolution remade the system of property-holding that had existed in France before 1789. The revolutionary changes aimed at two fundamental goals: the removal of formal public power from the sphere of property and the excision of property from the realm of sovereignty. The revolutionaries accomplished these two aims by abolishing privately-owned forms of power, such as jurisdictional lordship and venal public office, and by dismantling the Crown domain, thus making the state purely sovereign. This brought about a Great Demarcation: a radical distinction between property and power from which flowed the critical distinctions between the political and the social, state and society, sovereignty and ownership, the public and private. It destroyed the conceptual basis of the Old Regime, laid the foundation of France's new constitutional order, and crystallized modern ways of thinking about polities and societies.

By tracing how the French Revolution created a new legal and institutional reality, The Great Demarcation shows how the revolutionary transformation of Old Regime property helped inaugurate political modernity