Just out from the Stanford University Press is Newsworthy: The Supreme Court Battle over Privacy and Press Freedom, by Samantha Barbas, Professor of Law at University at Buffalo Law School. 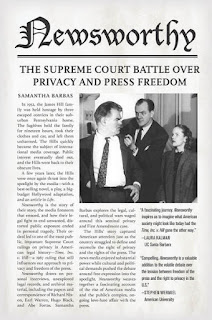 In 1952, the Hill family was held hostage by escaped convicts in their suburban Pennsylvania home. The family of seven was trapped for nineteen hours by three fugitives who treated them politely, took their clothes and car, and left them unharmed. The Hills quickly became the subject of international media coverage. Public interest eventually died out, and the Hills went back to their ordinary, obscure lives. Until, a few years later, the Hills were once again unwillingly thrust into the spotlight by the media—with a best-selling novel loosely based on their ordeal, a play, a big-budget Hollywood adaptation starring Humphrey Bogart, and an article in Life magazine. Newsworthy is the story of their story, the media firestorm that ensued, and their legal fight to end unwanted, embarrassing, distorted public exposure that ended in personal tragedy. This story led to an important 1967 Supreme Court decision—Time, Inc. v. Hill—that still influences our approach to privacy and freedom of the press.

Newsworthy draws on personal interviews, unexplored legal records, and archival material, including the papers and correspondence of Richard Nixon (who, prior to his presidency, was a Wall Street lawyer and argued the Hill family's case before the Supreme Court), Leonard Garment, Joseph Hayes, Earl Warren, Hugo Black, William Douglas, and Abe Fortas. Samantha Barbas explores the legal, cultural, and political wars waged around this seminal privacy and First Amendment case. This is a story of how American law and culture struggled to define and reconcile the right of privacy and the rights of the press at a critical point in history—when the news media were at the peak of their authority and when cultural and political exigencies pushed free expression rights to the forefront of social debate. Newsworthy weaves together a fascinating account of the rise of big media in America and the public's complex, ongoing love-hate affair with the press.


"This fascinating book journeys back to a transformative moment in Supreme Court history, when it declared that the Constitution protected the press's invasion of privacy of newsworthy subjects. Newsworthy inspires us to imagine what American society might look like today had the decision gone the other way."

"With a compelling narrative of the important and fascinating Supreme Court case of Time, Inc. v. Hill, Newsworthy is a valuable addition to the volatile debate over the tension between freedom of the press and the right to privacy in the U.S."