Ziegler's "Abortion and the Law in America" 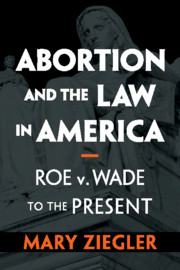 With the Supreme Court likely to reverse Roe v. Wade, the landmark abortion decision, American debate appears fixated on clashing rights. The first comprehensive legal history of a vital period, Abortion and the Law in America illuminates an entirely different and unexpected shift in the terms of debate. Rather than simply championing rights, those on opposing sides battled about the policy costs and benefits of abortion and laws restricting it. This mostly unknown turn deepened polarization in ways many have missed. Never abandoning their constitutional demands, pro-choice and pro-life advocates increasingly disagreed about the basic facts. Drawing on unexplored records and interviews with key participants, Ziegler complicates the view that the Supreme Court is responsible for the escalation of the conflict. A gripping account of social-movement divides and crucial legal strategies, this book delivers a definitive recent history of an issue that transforms American law and politics to this day.

'Mary Ziegler's thorough and impeccable research has established her as the premier historian of abortion in the post-Roe era. By giving equal attention to activists on both sides of the struggle, her scholarship offers an essential grounding for anyone who seeks to debate the issue as a newly-constituted Supreme Court now considers whether to alter the established precedents that have governed American law for the last quarter-century.'

'For decades, the views of US Supreme Court Justices have dominated scholarly and popular conversations about abortion in the United States. In Abortion and the Law in America, Mary Ziegler offers a fresh take on the enduring debate; she centers the perspectives of activist organizations and grassroots tacticians in struggles over reproductive rights. Ziegler’s analysis of on-the-ground developments shows us that the Court is but one of many drivers of conflict and change in the unpredictable battle over Roe v. Wade.'

Tomiko Brown-Nagin - author of Courage to Dissent: Atlanta and the Long History of the Civil Rights Movement, Winner of the Bancroft Prize

'Few scholars know the history and law of abortion as well as Mary Ziegler. In this compelling book, she demonstrates how much we miss by continuing to view abortion through the prism of that 'clash of absolutes' pitting the constitutional right to choose against the constitutional right to life. In fact, she demonstrates, almost since Roe v. Wade was handed down, foes and advocates have fought about the costs and benefits of abortion, as well as rights to it. Abortion and the Law in America is indispensable reading for anyone interested in the vanishing line between science and spin, social movements and their legal strategies, and the role of the Supreme Court in the past - and future - of one of our most intractable conflicts.'

'Mary Ziegler understands the 'on the ground' history of the politics of Roe, and its connection to the evolving abortion rights jurisprudence of the Supreme Court, better than anyone else. Abortion and the Law in America shows that this story is far more complex than we imagine it to be, and that the abortion fight is likely to continue regardless of whether the Court overturns its landmark decision. As Americans have debated abortion, they have also debated and disagreed on a host of other issues concerning women's health, poverty policy, family structure, and even the standards for evaluating evidence and science. The abortion debate, she shows, has both mirrored and furthered the collapse of consensus in the larger culture.'