Pound at Large and at Bay

﻿﻿[The following is the fifth in a series of posts on Roscoe Pound and the administrative state. The series starts here.]

Roscoe Pound maintained his tolerant view of the administrative state as long as he believed that most lawyers and legal scholars believed with him that common lawyers could and should subordinate the discretion of administrators to “justice according to law.” He perceived reassuring signs of their shared commitment into the 1930s, but by the middle of the decade--and as others have noted--he had to acknowledge that a “juristic left wing” had rejected his views and was ascendant in the legal academe and the New Deal. 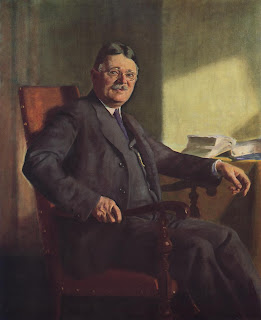 Throughout the 1920s, Pound received many gratifying acknowledgments of his intellectual leadership in the guise of invitations to address bar associations. From Vermont to Utah, he used these as occasions to repeat charge common lawyers with the containment of the administrative state. As in his earlier articles, Pound adopted presented the challenge without alarm. He reminded Oklahoma’s solons that “the epoch-making achievements of legal history have resulted from infusions into the law from without rather than from professional creative activity from within.” He cautioned the bar against A.V. Dicey’s equation of the rule of law with the supremacy of common-law courts. “The administrative tribunals of France,” he lectured Utah’s lawyers in 1927, “are in spirit and in conduct . . . ordinary courts.” Dicey’s “confident distinctions” between England and the Continent had “at least [lost] their edge.” Again: although Magna Carta still had meaning for the United States in 1928, it was not the last word in governance. “Continental Europe has shown signs of moving in our direction as we have in theirs.” Even the First Hundred Days of Franklin D. Roosevelt’s administration did not immediately shatter Pound’s faith that the common law would absorb and contain administration. The “constant swinging back and forth from reliance mainly on rules to reliance chiefly on personal judgment and discretion” was surely evident, he declared at the University of Cincinnati's law school in June 1933, but “a new process of crystallizing will presently supervene.” “The new institutions will presently fall into a legal mode,” he prophesied, and “in the end we shall lose little that is significant in our inherited law.”

Pound did not have to rely on the applause of practitioners for affirmation in the 1920s; it came in comforting quantities from many other sources. All hands traced the origins of the judicial council movement, which sought to professionalize judicial administration, to his St. Paul address. Students of the courts, such as the West Virginia law dean Thurman W. Arnold and the Yale law professor Charles E. Clark publicly--though, between themselves, mockingly--acknowledged their debt to the great man. In 1925 the University of Wisconsin offered him its presidency and a princely salary. (In the end, Pound refused to abandon his “life’s work,” legal education and legal research.) President Herbert Hoover appointed him to a commission, headed by the former attorney general George Wickersham, to investigate criminal law enforcement and Prohibition. Pound wrote the commission’s final report, published in 1931. As he completed it, he was widely mentioned for the seat on the World Court that Charles Evans Hughes vacated to become Chief Justice of the United States.

His celebrity in 1931 was the acme of his career. As Laura Kalman has detailed, since 1928 Harvard’s law faculty had grown increasingly restive under Pound’s suzerainty, until at last even Joseph Henry Beale was overheard complaining that the dean was growing “nuttier and nuttier.” Many on the faculty felt Pound should have fought harder when President Abbott Lawrence Lowell declined to appoint two proteges of Felix Frankfurter, Nathan Margold and Wilbur Katz. Others could not stand his refusal to delegate, his lengthy absences during the deliberations of the Wickersham Commission, and his growing irascibility. In 1934, Harvard’s new president, James Bryant Conant, alarmed by Pound’s “feuding with the faculty,” started attending its meetings and was distressed to find there “the most quarrelsome group of men I ever encountered.” At last in September 1935, Pound announced his retirement, effective a year hence, when he would conclude his twentieth year as dean.

Losing the respect of his faculty was bad enough; losing the mantle as the nation’s most progressive scholar of jurisprudence was even worse. During his long deanship, Pound made no discernible progress on his projected great work of sociological jurisprudence. As that project stagnated other scholars

, especially at Columbia and Yale, brought more recent developments in empirical social science to the law. The impatience of these “legal realists” with Pound burst into view in 1930, in a dispute that N.E.H. Hull has aptly termed “perhaps the most famous controversy in the history of American jurisprudence.” In The Bramble Bush (1930), Karl N. Llewellyn declared that what officials “do about disputes is . . . the law itself” and, in a related article, accused Pound of outdated “precept-thinking.” “At times [his] work purports clearly to travel on the level of considered and buttressed scholarly discussion,” Llewellyn wrote, “at times on the level of bedtime stories for the tired bar; at times on an intermediate level, that of the thoughtful but unproved essay.” Still more provoking was Jerome Frank’s Law and the Modern Mind (1930), which accused jurists who insisted on certainty in the law of emotional immaturity. According to Frank, they sought an infallible substitute for their all-too-fallible fathers. Pound came in for a skewering, quite unfairly, he believed, for he was convinced that Frank had misquoted him. “I cannot afford to discuss anything with one who uses such tactics,” he lectured Llewellyn, “and should like to suggest to you whether you can afford to identify yourself with him.”

The quarrel played out in the law reviews in 1930-31 and has been most carefully studied by Hull. For present purposes, the most important aspect of the debate was its implications for the administrative state. If law were just what officials did, if it were just an artifact of the psyche, then “justice according to law” was a myth and politics an unchained monster. So closely did Llewellyn’s and Frank’s arguments stand in his thinking that he tended to conflate the two under the rubric of “give-it-up” philosophies. Both men, it seemed to Pound, had abandoned the search for law as something more than the threats of force against those deemed obnoxious by the politically powerful. Thus, he privately described Law and the Modern Mind as “a highly sensational book chiefly important as revealing the frame of mind of a group of men who believe that law is whatever those who administer it choose to do.”

Pound tried to contain the “juristic left wing” by relating their insights to his more comprehensive view of law. (Llewellyn and Frank had hold of a piece of the elephant, Pound implied; Pound saw the elephant whole.) That he might fail to do this became apparent on December 30, 1933, at a session the annual meeting of the American Association of Law Schools. Pound spoke first. He conceded that both sides in the controversy had “its eye on something significant.” The realists aptly noted that, in some sense, “everything that enters into or affects the judicial process is ‘law.’” Yet rather than attempt to appropriate the term law for what, in Pound’s schema, was just one of four meanings of the word, the realists should, in turn, conceded that legal precepts and principles were a distinct source of law. He concluded on a chivalrous note: “So, Mr. President, as one who has borne the heat of the day in jurisprudence for a generation, I can only say to those who are coming forward to do battle: ‘Venite fortior me post me.’”

Anyone who expected the next speaker to meet Pound in direct combat was to be disappointed. Since the preceding summer, Jerome Frank had been serving as General Counsel of the Agricultural Adjustment Administration (AAA), and he was too consumed with implementing one of the New Deal’s most ambitious regulatory schemes to engage in jurisprudential debate. To be sure, he repeated his dismissal of the notion of binding, a priori legal principles. “Principles are what principles do,” he famously declared. Yet he was far more interested in reporting on the pitched legal combats of the New Deal. His most memorable conceit was a contrast of two fictional government lawyers, “Mr. Absolute” and “Mr. Try-It.” Mr. Absolute indulged in “the Jovian fiction” that “the true, pertinent legal principles must prevail” whatever the consequences. In fact, because of a psychological predisposition, he was bound to arrive at the functionally desirable result, yet because he had to “attitudinize to himself,” he “wast[ed] time, proceed[ed] unnecessarily by indirection, and burn[t] up his energies needlessly.” Mr. Try-It’s point of departure, in contrast, was the desirability of a given program. He forthrightly looked for ways to justify it and generally succeeded in finding “satisfactory premises” that lead to his conclusion. “There are, so to speak, plenty of vacant premises which can be sufficiently repaired or remodeled,” Frank opined.

Pound could have scarcely encountered more galling evidence that the “give-it-up” theorists and their legion of Mr. Try-Its were running the New Deal while he was mired with a squabbling faculty in Cambridge. Frank’s dismissal from the AAA in the “purge” of 1935 must have been gratifying, but, if so, the realist’s return to Washington as a commissioner of the Securities and Exchange Commission (SEC) would have been alarming. By 1936, a militant tone, previously reserved for private communications, had crept into Pound’s public statements and publications. Pound did not suddenly convert to “mechanical jurisprudence”: Blaisdell and Nebbia, he wrote, were “not at all sudden and radical departures”; on the contrary, they were “in line with an established view of what is reasonable.” He did feel obliged to demonstrate the superiority of the courts to administration, however. In January 1936 he favorably contrasted equity courts’ powers of “visitation” over corporations with the free-wheeling authority of public service commissions and the SEC under the Public Utility Holding Company Act of 1935. “Much more danger of arbitrary action has arisen” under administrators, he warned, “than exercise of the visitatorial jurisdiction by the courts could possibly carry with it.” And at an international gathering of jurists held at Harvard a month shy of the end of his deanship, he warned that law--“the voluntary subjection of authority and power to reason,” a “traditional technique” of applying “principles drawn from recorded judicial experience”--was under attack around the world and “most aggressively in the United States.” (One feels compelled to object: more aggressively than Nazi Germany or Soviet Russia?) Earlier, Pound wrote as if the domination of administration by the common law was inevitable; in August 1936, he wrote as if it was very much in doubt.

Pound stepped down from the deanship in September 1936 and then onto a steamship for a round-the-world cruise on February 4, 1937. The next day President Roosevelt announced a plan to increase the size of the U.S. Supreme Court by appointing one justice for each sitting member over seventy and one half years of age. Pound could only look on from abroad, one assumes, with mounting frustration, as the great struggle for judicial supremacy raged. Although the battle won by the time he debarked in New York on August 31, 1937, he was still in a fighting mood. The Court-packing plan “was one of the most outrageous things that ever occurred in American legal history,” he fumed at dockside.

Until the Court-packing plan, Pound had always been willing to chide practitioners for their conservative attachments and to caution them against mounting an “obstinate, rear-guard action” against reform. In the fall of 1937 he was eager to stand shoulder-to-shoulder with them at the ramparts. As it happened, the chieftains of the American Bar Association was about to give him with the opportunity to do just that.

[The series continues here.]
Posted by Dan Ernst at 2:42 PM