Partnoy on the Match King and Us

Frank Partnoy, University of San Diego School of Law, has posted Historical Perspectives on the Financial Crisis: Ivar Kreuger, the Credit-Rating Agencies, and Two Theories About the Function, and Dysfunction, of Markets. Partnoy is the author of a recent book on Kreuger, The Match King (pictured below). Here is the abstract of the SSRN paper: 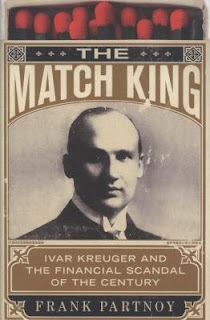 This Essay discusses two historical parallels between the current financial crisis and the financial crisis of the late 1920s and 1930s. First, financial innovation was at the core of both crises. In particular, the machinations of Ivar Kreuger illuminate how financial innovation tends to outstrip the ability, and perhaps the willingness, of investors and intermediaries to process information. Second, reliance on credit ratings began as a response to the 1929 crash and became a primary cause of the recent crisis. During the 1930s, regulators developed rules based on credit ratings; those rules are the ancestors of today’s widespread regulatory reliance on ratings. Without financial innovation and overreliance on credit ratings, the recent crisis likely would not have occurred, and certainly would not have been as deep.
Posted by Dan Ernst at 1:56 AM