History in the News

Here's a roundup and a bit of commentary about recent history-related stories in the news.

Archivists are busy documenting the rise and evolution of Occupy Wall Street.  According to the Wash. Post,  over "a half-dozen major museums and organizations from the Smithsonian Institution to the New York Historical Society" are engaged in a "collecting frenzy" of anything Occupy-related, including tweets. Perhaps it should come as no surprise that in this fraught political environment, the archiving effort has precipitated controversy. Members of OWS object to the presumption that mainstream organizations such as the Smithsonian and the National Museum of American History can and should interpret Occupy's history. OWS members want to tell their own story; in an effort to "own the OWS narrative" members have begun their own archival collection. A different controversy emanates from critics who claim that the rush to document OWS by mainstream organizations--particularly the Smithsonian--reflects a liberal bias. "It looks like taxpayer-funded hoarding, as opposed to rigorous historical collecting," argues Tom Fitton of Judicial Watch. In response to such criticism, Smithsonian officials point out that archivists there also have collected materials related to conservative causes, most notably, the Tea Party Movement.  This response may not appease critics on the Right. It's not clear that the Smithsonian's collection of Tea Party-related material occurred as speedily as its OWS collection, or that there was as much interest in the Tea Party as apparently exists in OWS.  Read all about the archiving efforts and the controversies surrounding them here, here, here, and here.

Politics, idiosyncratic subject matter interests, and resource limitations all can influence whose history is preserved, remembered, and disseminated.  It's worth noting, however, that soon after its advent in March of 2010, the Tea Party Movement proved of great interest to prominent scholars and researchers. For instance, the movement is the subject of a book published in September of 2010 by the distinguished historian, Jill Lepore. In The Whites of Their Eyes: The Tea Party's Revolution and the Battle Over American History,  Lepore interrogates the movement's historical claims about the Founding and finds much of the party's rhetoric inaccurate or oversimplified. Another take on the Tea Party is offered by political scientists Theda Skocpol and Vanessa Williamson in The Tea Party and the Remaking of American Conservatism, to be published in January of 2012.  This work reveals tensions between Tea Party members' professed anti-government ideology and their support for popular governmental programs such as Social Security and Medicare. These books, among other recently-published scholarship noted on this blog here (Corey Robin's Reactionary Mind), here (JAH Roundtable on Conservatism), and here (Mark Tushnet's Review of Teles, Rise of the Conservative Legal Movement), just to cite a few examples, suggest that conservative causes are popular subjects of scholarly inquiry and of immense interest to the literate public. Knowledgeable archivists at the Smithsonian and elsewhere presumably will, of necessity, and certainly should give these social and legal movements adequate attention. The November, 2011 edition of Outlook, the newsletter of the Organization of American Historians, reported on the Executive Board's response to a call from the Office of Human Research Protections, a division of the U.S. Department of  Health and Human Services, for comments on the "Common Rule," which mandates Institutional Review Board oversight of research by  recipients of federal funding.  The Board unanimously recommended that "the work of historians, especially oral historians, should be exempt from the purview of institutional review boards." Find the OAH statement here.

The postwar civil rights movement continues to produce newsworthy items. One recent story concerned civil rights-era cold cases. One such case involves the mysterious deaths of Florida NAACP official Harry T. Moore and his wife, Harriette Moore.  Harry Moore's investigations of lynchings and his outspoken criticism of local law enforcement made him a target of white supremacists. Moore was murdered on Christmas day in 1951-- [n]early 12 years before Medgar Evers was fatally shot, 14 years before Malcolm X was slain and 17 years before Martin Luther King Jr. was assassinated.  Read about the case and one of the nation's earliest martyrs for the cause of civil rights here; also see this related photo gallery. 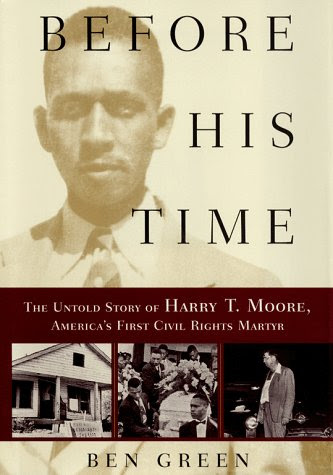 The  story of Harry Moore's activism and brutal murder is told by Ben Green in Before His Time: The Untold Story of Harry T. Moore, America's First Civil Rights Martyr.  For more on Florida's history of violent white resistance to civil rights activism, see Emancipation Betrayed: The Hidden History of Black Organizing and White Violence in Florida from Reconstruction to the Bloody Election of 1920 by Paul Ortiz.

In an opinion that the N.Y. Times' Adam Liptak called "an extraordinary about-face," the U.S. Court of Appeals for the Eleventh Circuit reversed course in an employment discrimination case in which several veterans of the civil rights movement submitted an amicus curiae brief.  The most arresting facts in the case turned on a single word: "boy."  On several occasions, black male plaintiffs alleged, the white manager of a Tyson Foods operation in Gadsen, Alabama called black male employees "boy," indicating racial animus.  A jury agreed with plaintiffs' view of the case, but the appeals court overruled the jury's verdict.  In a 2005 opinion the Eleventh Circuit explained that the use of "boy" without a modifier (e.g. black boy) did not constitute evidence of discrimination. The U.S. Supreme Court reversed the appeals court in a unanimous 2006 opinion. "Although it is true the disputed word will not always be evidence of racial animus, it does not follow that the term, standing alone, is always benign," wrote the Court in a per curiam opinion. "The speaker's meaning may depend on various factors including context, inflection, tone of voice, local custom, and historical usage." 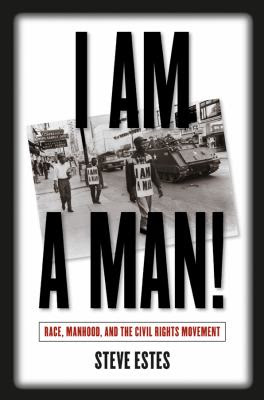 This past month, after years of additional litigation, the Eleventh Circuit finally issued an opinion consistent with the Supreme Court's 2006 decision.  The about-face followed "unflattering news coverage," the possibility that the  full Eleventh Circuit would "rebuke" the panel, and the filing of the amicus brief by prominent civil rights leaders, including Hon. Andrew Young and Rev. Fred Shuttlesworth. The brief argued that history, custom, social context and precedent all indicate that the word "boy," when directed by whites to black men, presumptively is racially derogatory.  It cited works of history and literature as well as ephemera from the civil rights era, most notably the famous "I Am A Man" posters donned by many civil rights protesters.  For more on the cultural significance of these posters, see Steve Estes's book, "I am a Man: Race, Manhood, and the Civil Rights Movement."

Peter Birkenhead's critique of Southern plantation tours,  "Why We Still Can't Talk about Slavery," published on Salon.com, is well worth a read.  On the tours, he claims, "Civil War culture is presented as 'authentic.' They just leave out the slavery part." Here's an excerpt:


Our guide, in a tone equal parts admiring and envious, devoted 90 minutes to the armoires, linens and chamber pots of the home, but almost no time to the people who built, creased and cleaned them. The words “slave” and “slavery” were never mentioned.

Birkenhead's provocative article poses big and important questions about how citizens choose to remember a painful past that still is relevant.  His wide-ranging commentary moves from a discussion of slavery to a consideration of the novel and motion picture, The Help, the Holocaust, and the Tea Party, among other matters.

Birkenhead's trenchant commentary brings to mind an important project underway at Monticello: the restoration of Mulberry Row, location of some of the slave quarters on President Thomas Jefferson's plantation. The restoration will make the experiences of slaves more prominent in visitors' tours of Monticello. Susan Stein, Senior Curator & Vice President for Museum Programs at Monticello, explains in a recent article: “We don’t shy away from slavery, we talk about slavery because we know that it’s fundamentally important to understanding Jefferson and understanding America.”  For more on the vast restoration project, see "Bringing Back Mulberry Row," a blog post by Stein.