Glennon reviews Green, "The Bible, the School, and the Constitution" 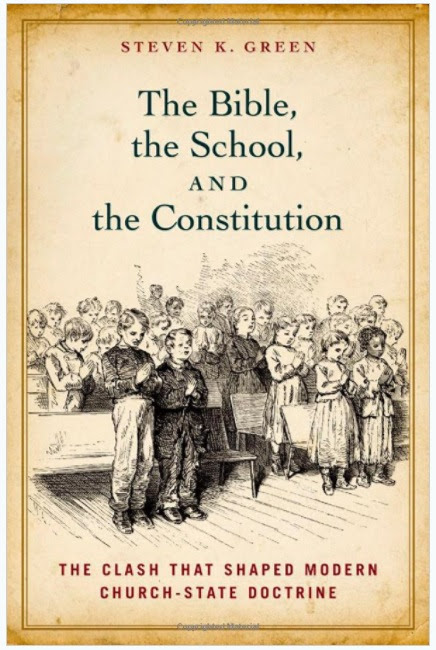 Steven Green's THE BIBLE, THE SCHOOL, AND THE CONSTITUTION: THE CLASH THAT SHAPED MODERN CHURCH-STATE DOCTRINE (Oxford University Press) is the subject of a new review, from the Law and Politics Book Review. Reviewer Colin Glennon (Fort Lewis College) recommends the book to "anyone interested in constitutional questions surrounding the separation of church and state, the history of the formation of public schools in the United States, or those with a curiosity toward religious history in public policy." Here's more:


In a major contribution to the perpetual conflict between church and state, Green traces the debate from formation of early public schools in America with intensive study of the debate surrounding the proper role of religion in the nation’s schools, the School Question as it came to be known, from 1869 to 1876. As Green declares: “One cannot appreciate the Supreme Court’s modern church-state jurisprudence without understanding the development of the School Question during the nineteenth century” (p.8).

A common theme throughout the book is clarifying the depth of the School Question in its original context. Green points out that while today religious activity in public schools and the direction of public funds to parochial schools are distinct and separate matters of debate, this was not always the case: “For the nation’s first 150 years, controversies over school prayer and school funding were inseparable” (p.7). In fact, Green points out that initially the debate over teaching religious morality in school centered on the best way to do so, not whether or not it was to be done.

Also in the most recent batch of LPBR reviews: