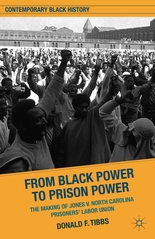 Although over at The Faculty Lounge Al Brophy has already noted the publication of From Black Power to Prison Power: The Making of Jones v. North Carolina Prisoners’ Labor Union, by Donald F. Tibbs, Drexel Law, we want to note it here as well.  According to Palgrave Macmillan’s website:


This book uses the landmark case Jones v. North Carolina Prisoners' Labor Union to examine the strategies of prison inmates using race and radicalism to inspire the formation of an inmate labor union. It thus rekindles the debate over the triumphs and troubles associated with the use of Black Power as a platform for influencing legal policy and effecting change for inmates. While the ideology of the prison rights movement was complex, it rested on the underlying principle that the right to organize, and engage in political dissidence, was not only a First Amendment right guaranteed to free blacks, but one that should be explicitly guaranteed to captive blacks—a point too often overlooked in previous analyses. Ultimately, this seminal case study not only illuminates the history of Black Power but that of the broader prisoners' rights movement as well.

"From Black Power to Prison Power feels stunningly new-a book about a prison union, which most of us know absolutely nothing about, even though their case traveled all the way to the United States Supreme Court in 1977. Donald F. Tibbs plumbs the deep history of black power, especially as it relates to criminal justice. He goes back decades before the North Carolina Prisoners' Labor Union lawsuit to put it into the context of the emergence of black power, a movement of national and even global dimensions. Tibbs links black power to the movements for feminism, workers' rights, and Civil Rights and along the way joins radical literature, activism, and litigation in a way I have not seen before. Legal history has rarely been so exciting." - Alfred L. Brophy, Judge John J. Parker Distinguished Professor of Law, University of North Carolina, Chapel Hill

"The plight of black men in prisons has too seldom troubled America, just as the plight of black people generally too often has gone unheeded except in the glare of violence or fear of violence such as conjured up in the raging cry of 'Black Power!' In From Black Power to Prison Power Donald F. Tibbs deftly exposes how racial fears joined anti-radical repression to entrench institutional law and order as a substitute for justice in the development and decision of the too little noticed 1977 US Supreme Court case of Jones v. North Carolina Prisoners' Labor Union." - Thomas J. Davis, PhD, JD, author of Race Relations in America

"Donald F. Tibbs has written one of the best examinations of the power of seemingly powerless people to organize, dissent, and secure their rights. This is an extraordinary book that should be read widely and regarded as a must read for anyone interested in the prisoners' rights movement." - Matthew Whitaker, ASU Foundation Professor of History and director of the Center for the Study of Race and Democracy, Arizona State University
Posted by Dan Ernst at 12:30 AM