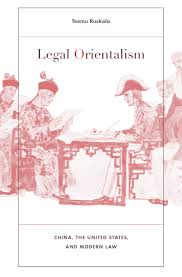 Since the Cold War ended, China has become a global symbol of disregard for human rights, while the United States has positioned itself as the world’s chief exporter of the rule of law. How did lawlessness become an axiom about Chineseness rather than a fact needing to be verified empirically, and how did the United States assume the mantle of law’s universal appeal? In a series of wide-ranging inquiries, Teemu Ruskola investigates the history of “legal Orientalism”: a set of globally circulating narratives about what law is and who has it. For example, why is China said not to have a history of corporate law, as a way of explaining its “failure” to develop capitalism on its own? Ruskola shows how a European tradition of philosophical prejudices about Chinese law developed into a distinctively American ideology of empire, influential to this day.

The first Sino–U.S. treaty in 1844 authorized the extraterritorial application of American law in a putatively lawless China. A kind of legal imperialism, this practice long predated U.S. territorial colonialism after the Spanish–American War in 1898, and found its fullest expression in an American district court’s jurisdiction over the “District of China.” With urgent contemporary implications, legal Orientalism lives on in the enduring damage wrought on the U.S. Constitution by late-nineteenth-century anti-Chinese immigration laws, and in the self-Orientalizing reforms of Chinese law today. In the global politics of trade and human rights, legal Orientalism continues to shape modern subjectivities, institutions, and geopolitics in powerful and unacknowledged ways.

TOC here; blurbs after the jump.

“This breakthrough book places the legal study of China’s relationship to the West, and vice versa, on a new and deep foundation. It deserves serious attention from any thoughtful student of comparative law.”—Bruce Ackerman, Yale University

“Extraterritoriality was the exception until it became the norm—an anomaly of jurisdiction that set the precedent for other practices including extraordinary rendition, indefinite detention, offshore prisons, and drone attacks. A history of conceptual makeshifts, illocutionary effects, and massive legal fictions, Legal Orientalism, painstakingly researched, humorous, and dispassionate, uniquely accounts for the ambiguous place of China in the institutions of modernity.”—Haun Saussy, University of Chicago

“Teemu Ruskola has written a provocative book on legal orientalism, a subject that he conceptualizes and explores with originality and sophistication. His book makes an important contribution to multiple fields. On the one hand, it is a historical analysis that illuminates important aspects of nineteenth- and early-twentieth-century world history. On the other, this book is urgently contemporary, speaking to interest in legal studies and the social sciences about the place of law and legal reform in present-day China.”—Mae Ngai, Columbia University

“Ruskola has written a work that stretches across time, place and legal jurisdiction; Legal Orientalism shows a scholarly mind for detail, combined with a rare degree of expansiveness and reach. A remarkable book.”—Michael Dutton, Goldsmiths University of London
Posted by Dan Ernst at 10:00 AM