Although Emily has already noted the publication of an excerpt on Slate, we ought to have fully noticed the publication by Kyle G. Volk, University of Montana, of Moral Minorities and the Making of American Democracy (Oxford, 2014).  Here is a summary: 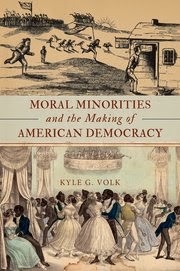 Should the majority always rule? If not, how should the rights of minorities be protected? In Moral Minorities and the Making of American Democracy, historian Kyle G. Volk unearths the origins of modern ideas and practices of minority-rights politics. Focusing on controversies spurred by the explosion of grassroots moral reform in the early nineteenth century, he shows how a motley but powerful array of self-understood minorities reshaped American democracy as they battled laws regulating Sabbath observance, alcohol, and interracial contact. Proponents justified these measures with the "democratic" axiom of majority rule. In response, immigrants, black northerners, abolitionists, liquor dealers, Catholics, Jews, Seventh-day Baptists, and others articulated a different vision of democracy requiring the protection of minority rights. These moral minorities prompted a generation of Americans to reassess whether "majority rule" was truly the essence of democracy, and they ensured that majority tyranny would no longer be just the fear of elites and slaveholders. Beginning in the mid-nineteenth-century, minority rights became the concern of a wide range of Americans attempting to live in an increasingly diverse nation.

Volk reveals that driving this vast ideological reckoning was the emergence of America's tradition of popular minority-rights politics. To challenge hostile laws and policies, moral minorities worked outside of political parties and at the grassroots. They mobilized elite and ordinary people to form networks of dissent and some of America's first associations dedicated to the protection of minority rights. They lobbied officials and used constitutions and the common law to initiate "test cases" before local and appellate courts. Indeed, the moral minorities of the mid-nineteenth century pioneered fundamental methods of political participation and legal advocacy that subsequent generations of civil-rights and civil-liberties activists would adopt and that are widely used today.


Introduction
1. Making America's First Moral Majority
2. Sunday Laws and the Problem of the Christian Republic
3. The License Question and the Perils of "Pure Democracy"
4. Mixed Marriages, Motley Schools, and the Struggle for Racial Equality
5. "Jim Crow Conveyances" and the Politics of Integrating the Public
6. America's First Wet Crusade and the Sunday Question Redux
Epilogue: Making Democracy Safe for Minorities