Recently released from Harvard University Press: Invented by Law: Alexander Graham Bell and the Patent That Changed America, by Christopher Beauchamp (Brooklyn Law School). A description from the Press: 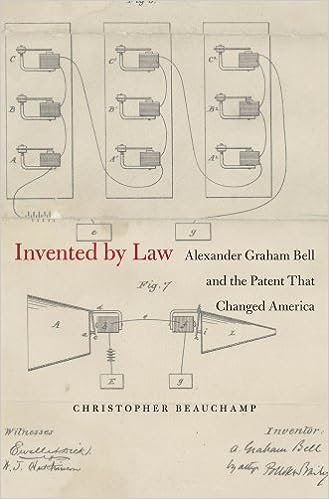 Alexander Graham Bell’s invention of the telephone in 1876 stands as one of the great touchstones of American technological achievement. Bringing a new perspective to this history, Invented by Law examines the legal battles that raged over Bell’s telephone patent, likely the most consequential patent right ever granted. To a surprising extent, Christopher Beauchamp shows, the telephone was as much a creation of American law as of scientific innovation.

Beauchamp reconstructs the world of nineteenth-century patent law, replete with inventors, capitalists, and charlatans, where rival claimants and political maneuvering loomed large in the contests that erupted over new technologies. He challenges the popular myth of Bell as the telephone’s sole inventor, exposing that story’s origins in the arguments advanced by Bell’s lawyers. More than anyone else, it was the courts that anointed Bell father of the telephone, granting him a patent monopoly that decisively shaped the American telecommunications industry for a century to come. Beauchamp investigates the sources of Bell’s legal primacy in the United States, and looks across the Atlantic, to Britain, to consider how another legal system handled the same technology in very different ways.

Exploring complex questions of ownership and legal power raised by the invention of important new technologies, Invented by Law recovers a forgotten history with wide relevance for today’s patent crisis.


“Invented by Law offers an utterly convincing reinterpretation of the legal struggles over the telephone patents and the making of the Bell telephone monopoly. Beauchamp locates lawyers as the leads in a historical drama that used to pay attention solely to inventors and those who claimed to be inventors. But his deeper contribution is to make the rise of the Bell empire both deeply contingent and deeply evocative of the transatlantic capitalist culture that came into being at the end of the nineteenth century. A brilliant work of economic-legal history, one shaped by meticulous and imaginative research and by an iconoclastic historical imagination.”—Hendrik Hartog

“Invented by Law shows how an epic late-nineteenth-century contest over intellectual property rights shaped the communications networks of twentieth-century America. Monopoly, Beauchamp concludes, was made and not born, an insight that raises troubling questions about the idealization of patent rights not only in the age of Alexander Graham Bell, but also in our own.”—Richard R. John