Moulton, "The Fight for Interracial Marriage Rights in Antebellum Massachusetts" 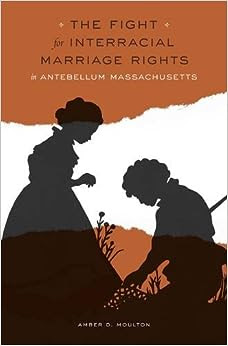 Well known as an abolitionist stronghold before the Civil War, Massachusetts had taken steps to eliminate slavery as early as the 1780s. Nevertheless, a powerful racial caste system still held sway, reinforced by a law prohibiting “amalgamation”—marriage between whites and blacks. The Fight for Interracial Marriage Rights in Antebellum Massachusetts chronicles a grassroots movement to overturn the state’s ban on interracial unions. Assembling information from court and church records, family histories, and popular literature, Amber D. Moulton recreates an unlikely collaboration of reformers who sought to rectify what, in the eyes of the state’s antislavery constituency, appeared to be an indefensible injustice.

Initially, activists argued that the ban provided a legal foundation for white supremacy in Massachusetts. But laws that enforced racial hierarchy remained popular even in Northern states, and the movement gained little traction. To attract broader support, the reformers recalibrated their arguments along moral lines, insisting that the prohibition on interracial unions weakened the basis of all marriage, by encouraging promiscuity, prostitution, and illegitimacy. Through trial and error, reform leaders shaped an appeal that ultimately drew in Garrisonian abolitionists, equal rights activists, antislavery evangelicals, moral reformers, and Yankee legislators, all working to legalize interracial marriage.

This pre–Civil War effort to overturn Massachusetts’ antimiscegenation law was not a political aberration but a crucial chapter in the deep history of the African American struggle for equal rights, on a continuum with the civil rights movement over a century later.


“An outstanding piece of history. Moulton is the first to provide a thorough examination of the shifting arguments for and against the repeal of laws prohibiting interracial marriage. She offers a nuanced and convincing explanation for why the forces of repeal were able to overturn the ban without diminishing white resistance to marriage across the color line. Her book is an insightful exploration of the evolving political, social, and moral thinking of whites and blacks struggling to comprehend the complex meaning of black freedom in the North.”—Joanne Pope Melish

“Amber Moulton’s finely-grained history of the nation’s first sustained fight for marriage rights chronicles the petitioning campaign that culminated in the repeal of Massachusetts’ interracial marriage ban in 1843. As advocates for equality struggled to make the case that marriage is a civil right on which all other social and political rights are dependent, those invested in preserving the North’s racial caste system waged a pitched political battle in newspapers, political cartoons, and the streets, warning that ‘amalgamation’ would lead to licentiousness and the end of social stability. Both sides had a role in shaping the debate about marriage and civil rights that continues to this day, making The Fight for Interracial Marriage Rights in Antebellum Massachusetts important reading for historians and activists alike.”—Elise Lemire