A Collection on Extrajudicial Conflict Resolution in Antiquity 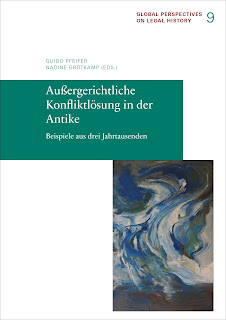 [We have the following announcement of Global Perspectives on Legal History 9, from the Max Planck Institute for European Legal History.]

Antiquity is often utilized as a reference to provide a historical dimension for contemporary phenomena. This also holds true for the prevailing scientific discourse on alternative or adequate remedies of dispute resolution. In this context, historical perspectives seem to be in vogue as narratives to legitimize one or another role model, whereas studies on practical examples from ancient legal orders tend not to be given serious consideration in the current debate.  Just as in the case of contemporary legal research, ancient legal history also distinguishes litigation at court from other mechanisms of conflict resolution. Nevertheless, where do the boundaries of judicial and extra-judicial mechanisms of dispute resolution lie within the framework of ancient societies? Are they alternatives in a narrower sense? Is there evidence for concerning the reason there was no (or at least no exclusive) judicial decision? This volume offers a selection of studies of pertinent illustrative material pertaining to these questions. While the relevant sources stemming from the prehistorical period, the Ancient Near East, Hellenistic Egypt and Classical Roman law may vary greatly, this just serves to widen our perspective on ancient times.

Global Perspectives on Legal History is a book series edited and published by the Max Planck Institute for European Legal History, Frankfurt am Main, Germany.  As its title suggests, the series is designed to advance the scholarly research of legal historians worldwide who seek to transcend the established boundaries of national legal scholarship that typically sets the focus on a single, dominant modus of normativity and law. The series aims to privilege studies dedicated to reconstructing the historical evolution of normativity from a global perspective.  It includes monographs, editions of sources, and collaborative works. All titles in the series are available both as premium print-on-demand and in the open-access format.

More information on the series and forthcoming volumes [here].