Lynch's History of Circuit Courts in the Early American Republic

David Lynch,a retired English Circuit Judge and a Master of the Bench of the Honourable Society of the Middle Temple, has published The Role of Circuit Courts in the Formation of United States Law in the Early Republic: Following Supreme Court Justices Washington, Livingston, Story and Thompson (Hart, 2018): 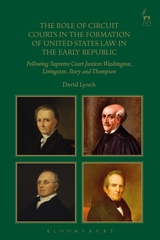 While scholars have rightly focused on the importance of the landmark opinions of the United States Supreme Court and its Chief Justice, John Marshall, in the rise in influence of the Court in the Early Republic, the crucial role of the circuit courts in the development of a uniform system of federal law across the nation has largely been ignored. This book highlights the contribution of four Associate Justices (Washington, Livingston, Story and Thompson) as presiding judges of their respective circuit courts during the Marshall era, in order to establish that in those early years federal law grew from the 'inferior courts' upwards rather than down from the Supreme Court. It does so after a reading of over 1800 mainly circuit opinions and over 2000 original letters, which reveal the sources of law upon which the justices drew and their efforts through correspondence to achieve consistency across the circuits. The documents examined present insights into momentous social, political and economic issues facing the Union and demonstrate how these justices dealt with them on circuit. Particular attention is paid to the different ways in which each justice contributed to the shaping of United States law on circuit and on the Court and in the case of Justices Livingston and Thompson also during their time on the New York State Supreme Court.

An endorsement that matters:


“Exhaustively researched and admirably argued, this book analyzes the crucial role played by the federal circuit courts in bridging the diversity of the new nation and the need to establish a unified body of national law. It also throws important new light on the internal operation of the Marshall Court. A significant contribution to our understanding of the federal court system of the early republic.”

Table of Contents after the jump.
1. The Supreme Court Justices and the Circuit Court Experiment

A Team Effort
Why Washington, Livingston, Story, and Thompson?


2. The Federal Circuit Courts: Shaping Local and National Justice for an Emerging Republic


The Politics of Federal Law
The Grand Jury Charge: A Bond between Government and Citizen
The Circuit Court Discourse in the Constitutional Ratification and Senate Debates
The Jurisdiction of the Federal Circuit Courts
'A Certain Uniformity of Decision in United States Law'
Conclusion

3. Bushrod Washington: The Role of Precedent and the Preservation of Vested Interests


A Federalist's Journey from Revolutionary Virginia to the Supreme Court
Justice Washington and the Role of Precedent in the Federal Legal System
Property Rights and Commercial Law on Circuit
States' Rights, the War of 1812, and Slavery
Conclusion

5. Joseph Story: Admiralty Expertise and the Importation of Common Law


State Supreme Court: Statutory Interpretation and New York 'Hard Law'
Contractual Obligations on the Second Circuit and on the Court
'What is to be Left to the States?'
The Cherokee Nation and the African-American Slave
Conclusion