R. B. Bernstein has published The Education of John Adams (Oxford University Press): 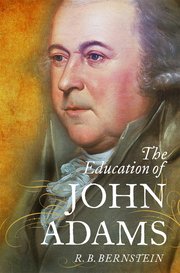 The Education of John Adams is the first biography of John Adams by a biographer with legal training. It examines his origins in colonial Massachusetts, his education, and his struggle to choose a career and define a place for himself in colonial society. It explores the flowering of his legal career and the impact that law had on him and his understanding of himself; his growing involvement with the American Revolution as polemicist, as lawyer, as congressional delegate, and as diplomat; and his commitment to defining and expounding ideas about constitutionalism and how it should work as the body of ideas shaping the new United States.

The book traces his part in launching the government of the United States under the U.S. Constitution; his service as the nation's first vice president and second president; and his retirement years, during which he was first a vexed and rejected ex-president and then became the revered Sage of Braintree. It describes the relationships that sustained him - with his wife, the brilliant and eloquent Abigail Adams; with his children; with such allies and supporters as Benjamin Rush and John Marshall; with such sometime friends and sometime adversaries as Benjamin Franklin, George Washington, and Thomas Jefferson; and with such foes as Alexander Hamilton and Timothy Pickering.

Bernstein establishes Adams as a key figure in the evolution of American constitutional theory and practice. This is the first biography to examine Adams's conflicted and hesitant ideas about slavery and race in the American context, raising serious questions about his mythic status as a friend of human equality and a foe of slavery. This book's foundation is the record left by Adams himself-- in diaries, letters, essays, pamphlets, and books. The Education of John Adams concludes by re-examining the often-debated question of the relevance of Adams's thought to our own time.

"This brilliant book is exactly what all who are interested in the history of the early American Republic could want. Bernstein's cogent presentation gives us a much-needed fresh look at John Adams, the man most responsible for constitutional independence." -- Annette Gordon-Reed , Charles Warren Professor of American Legal History, Harvard Law School, and Professor of History, Harvard University

"In many ways, John Adams is the Rodney Dangerfield of America's Founders: underestimated, underplayed, and never getting enough respect. This book offers much, much more. One of the nation's leading scholars of the Founders and their influence, Bernstein masterfully captures Adams in all his complexity. Far more than a rehearsal of the facts and accomplishments of Adams's life, this book reveals a real person: a man of tremendous intellectual curiosity and occasionally dogmatic politics who struggled to chart his path, fretted with insecurities, and wrestled with his place in history. Anyone seeking to understand the politics and passions of America's founding will be well served by reading this admirably concise and balanced book." -- Joanne B. Freeman , Professor of History and American Studies, Yale University

"What did the law mean to a revolutionary like John Adams? With a keen eye on his public and private lives, R. B. Bernstein traces Adams's reinterpretation of political frameworks such as monarchy and constitutionalism. Readers will savor this vivid portrait of the candid lawyer, diplomat, and president. It is always a delightful task for us to think alongside Adams, and Bernstein's Education is exceptionally lucid and enjoyable in contextualizing his legacy." -- Sara Georgini , author of Household Gods: The Religious Lives of the Adams Family

"A thoughtful account of John Adams' ideas and life, warts and all." -- Kirkus Reviews

"This work sets itself apart from other Adams biographies in its detailing of its subject's vision of governance, as well as his role as a legal and constitutional scholar, compared to other Founding Fathers, such as George Washington, Samuel Adams, James Madison, Alexander Hamilton, and, notably, Thomas Jefferson. Abigail Adams, John's wife, is also given consideration as an intellectual equal...An accessible and highly recommended biography." -- Library Journal