Hahn reviews Beatty, Age of Betrayal: The Triumph of Money in America, 1865-1900

The rise of the railroads and the U.S. Supreme Court play important roles in a story of the betrayal of a more democratic vision of America in Jack Beatty, Age of Betrayal: The Triumph of Money in America, 1865-1900 (Knopf), reviewed today in the Boston Globe by Steven Hahn, University of Pennsylvania. 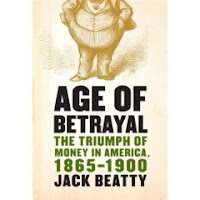 "Does American capitalism have a history?" Hahn writes. "Ever since the end of the Cold War, capitalism has appeared both omnipotent and omnipresent....Many scholars believe that America effectively began as a capitalist society, and these days few of them even bother to study capitalism's development."

Jack Beatty's interesting and pointed new book offers a different assessment. Yes, he proclaims, American capitalism does have a history, and it is a history that has compromised, if not undermined, our democracy and set us on a course of social and political crisis. In "Age of Betrayal," he takes us to the decades when the course was set, when "our" nation was born, and tells what he describes as "the saddest story."

What makes his " the saddest story" is a great moment of promise betrayed. In the bloodbath of the Civil War, two measures -- the Emancipation Proclamation and the Homestead Act, which took effect on Jan. 1, 1863 -- offered a radical vision of freedom, citizenship, and economic independence by ending slavery and providing cheap land for settlers in the trans-Mississippi West. It was a vision that would give national footing to Lincoln's America and enable the United States to stand apart in the 19th-century Atlantic world. Unfortunately, the promise steadily gave way before the twin engines of racism and industrial capitalism, leaving a very different society by century's end....

The central relationship of America's betrayal, in Beatty's view, was the alliance between government and business: an alliance that makes a mockery of the notion that the 19th century was an age of laissez-faire, and one that established the foundation of an emerging state capitalism. The central institutions were the courts, and especially the Supreme Court, which whittled away the promises of freedom, citizenship, and independence for ordinary Americans and instead handed them over to the corporations. And the central vehicle of this truly revolutionary transformation was the great engine itself, the railroad.

Legal historians will be familiar with a version of this story, but in Beatty's telling, it becomes a battle not among legal titans, but places Supreme Court Justice Stephen J. Field alongside Andrew Carnegie, and plays out in bloody battles in the streets. Ultimately, "the betrayal was the work not of technologies or abstract forces but of members of a new elite who inverted the Constitution, corrupted the political process, and launched a 'revolution from above.'"

Hahn finds in the book "a narrative that is absorbing in its detail and refreshingly uncompromising in its perspective." He notes that "although Beatty is a writer, editor, and news analyst rather than a professional historian, he is remarkably well versed in the scholarly literature on the period, and he frequently (perhaps a bit too frequently) invokes its leading authorities to support his arguments."

To read the full review, click here.
Posted by Mary L. Dudziak at 10:46 AM