Jordanna Bailkin, The Culture of Property: The Crisis of Liberalism in Modern Britain (University of Chicago Press, 2004) has been reviewed by Susan Scafidi, Southern Methodist University School of Law in the latest issue of the Law and History Review. Scaidi finds in the book "a multilayered perspective on the role of cultural artifacts within the Liberal imagination of a British nation prior to World War I." She writes: 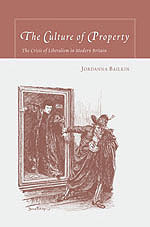 Property is a source of power; its ownership is an assertion of authority and individual autonomy. Even an armchair etymologist can link the term "estate" to "status" and, via a quick translation, to "standing." Culture, by contrast, is a dynamic expression, a description of collectively cultivated and shared beliefs and behaviors. It is also, according to literary theorist Terry Eagleton, "one of the two or three most complex words in the English language" (The Idea of Culture [Oxford: Blackwell, 2000], 1). Cultural property, then, serves as a locus of political debate and struggle over the collective ownership, control, and definition of society itself. Jordanna Bailkin's book examines this phenomenon within the context of late nineteenth- and early twentieth-century Britain. In her work, Bailkin persuasively illustrates the centrality of material culture to the history of the Liberal Party and also argues for the importance of this era in defining our present-day understanding of cultural property.

The Culture of Property is written as a series of interrelated essays, examining four distinct cultural property debates with a level of detail and a degree of narrative facility that make them seem fresh from the editorial pages. The first of these episodes involved a disputed group of Celtic gold ornaments discovered in 1896 and known as the Broighter Hoard. The Irish demand for repatriation of the ornaments from the British Museum, to this day the holder of infamous contested objects of cultural property, required analysis of ancient Irish history, the status of Ireland within the U.K., and the proper stewardship of authentic national culture. Ultimately venerable principles of property law rather than emerging theories of (post)colonial restitution decided the question. The Celtic gold went "home" to Ireland by authority of the king, but not before it had shaped an atypical chapter in the history of repatriation.
To continue reading, click here.
Posted by Mary L. Dudziak at 4:51 PM