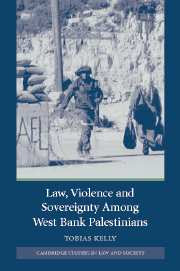 k of the Jordan River, with a focus on law as it relates to West Bank Palestinians as workers. The context is the complex post-Oslo bifurcation of authority, stemming from agreements between the Palestine Liberation Organization and Israel negotiated in Oslo in 1993, according to which Israel ceded some of its authority as belligerent occupant in the West Bank. Israel had been in control since the June 1967 war, during which it occupied the eastern sector of what had been known as Palestine while under British control between the world wars.
Under the agreements that followed the 1993 Oslo agreement, the PLO would administer some areas of the West Bank, principally the population centers, while Israel would remain in overall control. The PLO under the agreements set up a Palestinian National Authority as an administrative structure. This bifurcation of administration between Israel and the PLO was designed to last only a few short years, as Israeli withdrawal from the West Bank was expected to be negotiated soon.
The negotiation process lagged, however, and bifurcated government continued. The PNA regulated certain aspects of life, while Israel, through an administration set up at the start of its occupation, regulated others. To make the situation more complex still, many Palestinians performed day labor inside Israel, subjecting them to yet another jurisdiction, namely, Israeli law, and to the institutions of the Israeli government.
Kelly addresses the labor relations of Palestinians and how Palestinians as workers deal with conflicts and disputes that arise in relation to their employment. As the situation admits of little collective labor action, the focus is on individual employment relations with employers. The lack of trade union protection leaves only individual remedies to a Palestinian worker with a grievance against an employer....Each circumstance involves a Palestinian worker in a different set of legal relationships. And in none of them is there a single set of legal norms or a single legal structure.
The political backdrop is never far below the surface in any of these relationships. An issue that arose for Palestinians working in Israeli settlements was whether the law applicable to this labor relationship was Israeli law on the one hand, or on the other, the Jordanian law that is generally applicable in the West Bank. As the law in force when Israel’s occupation began, Jordanian law has continued to be applied as the law of the territory. For a Palestinian working in an Israeli settlement, however, Israeli law is preferable in certain respects. In particular, it is more generous as to severance pay upon termination. If Israeli law applies, then Palestinians and Israelis are treated the same, since Israel applies its own law to its citizens, even when they are in the West Bank. If Jordanian law applies, then a Palestinian worker has fewer rights than an Israeli fulfilling the same work in the same settlement. To make the matter more confusing, Israel’s application of its own law was, at the international level, unlawful, since an occupant is to apply the law in force.
The position that makes sense for the Palestinians at the ‘macro’ level – that their own law should apply in the West Bank to the exclusion of Israeli law – works against their interests on certain issues, like severance pay. Thus, Israeli lawyers representing Palestinians seek application of Israeli law....
Most who think about the legal, or political, situation in the West Bank operate in global terms: denial of self-determination, or Israel’s security concerns. Kelly’s book focuses on interaction at the economic and personal level, thus rendering these broader issues more concrete. His elucidation of these relationships may be helpful to potential mediators. Israelis and Palestinians will likely interact for a long time to come, and a sound legal basis for that interaction would make life more bearable for all concerned.
At a more general level, Kelly’s book invites thought about how disputes are handled in other societies.
For the full review, click here.
Posted by Mary L. Dudziak at 3:45 PM