Reviewed: Baker, The Rescue of Joshua Glover: A Fugitive Slave, the Constitution, and the Coming of the Civil War

H. Robert Baker, The Rescue of Joshua Glover: A Fugitive Slave, the Constitution, and the Coming of the Civil War (Ohio University Press, 2006) is reviewed on H-SHEAR by Stanley Harrold, Department of Social Sciences, South Carolina State University. It was noted earlier by Mark Graber on Balkinization, who called it "a nice page turner" and "a serious read because Professor Baker raises important questions about popular constitutionalism, a hot topic in contemporary legal discourse." 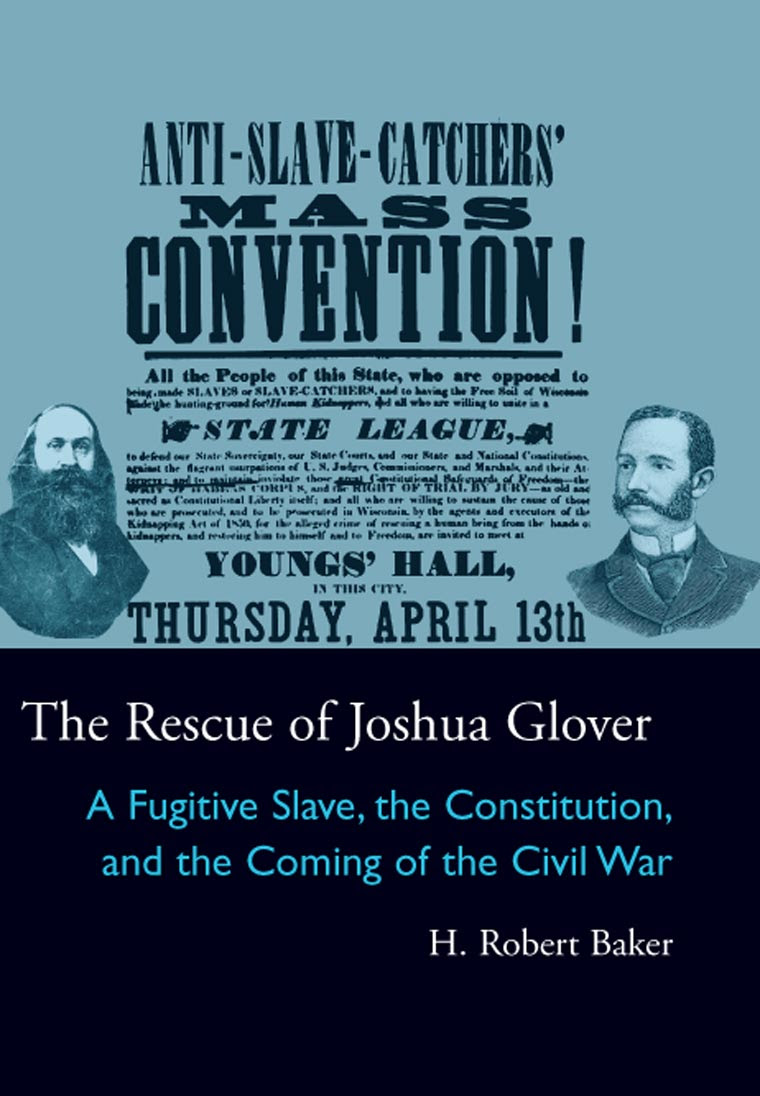 H. Robert Baker's The Rescue of Joshua Glover: A Fugitive Slave, the Constitution, and the Coming of the Civil War...begins with an account of a slave rescue in Wisconsin and proceeds to analyze antebellum constitutionalism in that state and the United States.The book is a worthy effort that deserves to be read by students of the Civil War era and the U.S. Constitution. Baker demonstrates an impressive scholarship, especially in his command of secondary sources. But his approach (and the fact that his real subject is dense and complicated constitutional history) may frustrate many readers.

As an aside: some of us find constitutional history rather compelling and important. So this aspect will not frustrate LHB readers. Harrold continues:

Northern resistance to the fugitive slave laws of 1793 and 1850 took two forms. First, alleged fugitive slaves, their neighbors, and mobs fought against masters, their agents, and U.S. marshals. Second, northern magistrates (sometimes acting under state-level personal liberty laws)employed a variety of legal means to prevent rendition or protect those who rescued fugitive slaves. The Joshua Glover case that Baker describes in his first chapter involved both forms. Glover had escaped from Missouri in 1852. In what appears to have been the first attempt in Wisconsin to enforce the Fugitive Slave Law of 1850, his master apprehended him near Racine in March 1854 and after a violent struggle took him to jail in Milwaukee. The next day, a crowd gathered. Some of its members broke into the jail, released Glover, and helped him get to Canada. Federal indictments against two of the mob leaders followed, and, as Baker carefully documents, their cases (not Glover's) became a significant part of Wisconsin's politics for the rest of the decade. Baker emphasizes that the legal points involved in these cases produced a public and lawyerly debate over the right of U.S. citizens to resist federal law, the meaning of the U.S. constitution, and the role of citizens as well as courts in interpreting it.

Once Glover got to Canada, his rescuers and other white Wisconsinites lost interest in him. This, for Baker, illustrates a tendency among the state's white residents to ignore the few African Americans who lived among them....Baker locates the constitutional roots of resistance to the Fugitive Slave Law of 1850 in republican principles, popular defense of natural rights, and antebellum views of state sovereignty. He provides an insightful discussion of the long national debate over the constitutionality of fugitive slave laws. He points out that the Constitution's fugitive slave clause and the Fugitive Slave Law of 1793 were compromises that allowed masters to recover slaves from states in which the escapees would otherwise be free under international law. The 1793 law, however, encouraged the kidnapping into slavery of free African Americans. Kidnapping in turn led to legal conflict between the national government and northern states as the states took "seriously their duty to protect their free blacks" (p. 36).

Baker ends his book with interesting and informative analyses of two apparent ironies. The first is that the white South relied on a constitutionalism similar to that prevalent in antebellum Wisconsin to secede from the Union in 1860-1861. The second is that it seemed to do so again a century later in defense of segregation against the U.S. Supreme Court ruling in Brown v. Topeka Board of Education. Readers should appreciate Baker's explanation of how Wisconsin's antislavery state rights differed from secessionist and segregationist state rights. It provides a strong finish to an uneven book.

Professor Baker responds to Harrold on H-Shear. Although author responses to reviews are not always recommended, Baker uses the opportunity to provide a helpful clarification of his purpose and method. In Baker's post, we can see what Graber found so compelling. Baker writes:

The subject of my book is not dense and complicated constitutional history as such, but rather the way in which everyday antebellum peoples resisted encroachments upon their constitutional rights. I state this quite clearly in my preface when I write that this book "traces the means by which Wisconsinites resisted the Fugitive Slave Act" (xi). I go on to clarify that this means of resistance sprang from a constitutional source: "the popular belief that the Constitution belonged in the last instance to the people" (xii). In short, my goal was to recover the popular culture of resistance and how this influenced constitutional thinking. This necessitated engaging discourse on a variety of levels--at public meetings, in newspaper articles, in speeches at the legislature, and before justices of high courts. It was a polyvalent discourse that mixed legal arguments, political debate, and popular culture.