New Bush and Cheney books by reporters are reviewed today. Takeover: The Return of the Imperial Presidency and the Subversion of American Democracy, by Charlie Savage (Little, Brown) is reviewed by Elbert Ventura in today's San Francisco Chronicle, and CHENEY: The Untold Story of America’s Most Powerful and Controversial Vice President (HarperCollins), by Stephen F. Hayes, is reviewed by Carl M. Cannon in the New York Times. While Savage's compass is broader, both books zero in on the role of Vice President Cheney, but from quite different perspectives.

The project, like so much surrounding Cheney, was a bit of a hush-hush undertaking, and some readers may wonder if Hayes, a conservative 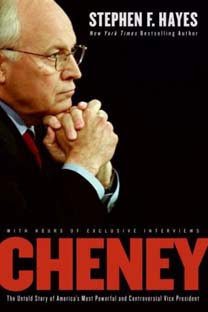 writer with an established view of the vice president (one of his articles was titled “Dick Cheney Was Right”), is an appropriate author for this biography. But the access he received was unique. His nearly 30 hours with Cheney, including sessions on Air Force Two heading home from Afghanistan and Iraq, may equal the time the vice president has spent with all other journalists put together.

Hayes, who writes for The Weekly Standard, is known primarily for trying to debunk the debunkers on the questions surrounding Saddam Hussein’s relationship, if any, with Al Qaeda before 9/11....

Hayes chooses to provide what is essentially a chronological account of Cheney’s life. The strength of this approach is that it places him in a context — and a rich context at that. We see Cheney trying to hang on to an academic career that never quite got off the ground, resisting jobs in politics twice before finally succumbing to its lures....

It’s a tenet of journalism that you show the readers, you don’t tell them, and Hayes does this well. He demonstrates that Cheney didn’t transmogrify himself into a hard case overnight. But this approach has drawbacks, too, particularly in a biography. We learn that the “secure undisclosed location” where Cheney and his staff spent so much time after 9/11 was usually Camp David, but we don’t learn whether living this way helped induce a bunker mentality. We are made to understand that Cheney views The New York Times as liberal and partisan. We are not told why Cheney’s solution to negative press coverage is to avoid reporters altogether.

Other questions about Cheney’s actions are left unanswered as well. How could anyone ignore John McCain on the question of torture — didn’t McCain’s horrific experiences in Hanoi earn him a great deal of deference? For that matter, why did Cheney not listen to himself on Iraq? In 1991, while defending the first Bush administration’s decision to halt the victorious United States forces at the Kuwait border, Cheney explained that occupying Iraq would alienate other Arab nations; immerse Washington in the differences among Iraqi Kurds, Sunnis and Shiites; and cost considerable American lives.

“The question in my mind,” Cheney said then, “is how many additional American casualties is Saddam worth? And the answer is not very damned many.”

What changed? Hayes’s answer is apparently 9/11. He suggests that having a Secret Service agent lift you, the second most powerful man in government, by your belt buckle and escort you to a secure bunker, where you sit for two hours believing you gave an order that downed an American passenger jet — well, these things change a man. Undoubtedly, but Hayes also quotes Cheney on his 1991 skepticism about occupying Iraq. Those words remain the more persuasive.

The rest is here.
Ventura's review of Takeover is more positive, and this is surely in part because of his admiration for the author, Charlie Savage, a "rarity in a Washington journalist, an assiduous digger who isn't content with playing court stenographer." Ventura sees this book as "a reproach of a press corps whose complacency greased the tracks for the dismantling of a balanced constitutional order." Ventura hopes Savage's book will not be lost in the "deluge of books taking on the Bush administration and its dismal legacy," and finds it "a masterful work of investigative journalism" that should be "remembered as one of the key texts of the Bush years." Savage, a Boston Globe reporter, won a Pulitzer Prize for his reporting on the Bush Administration, including the president's use of signing statements. 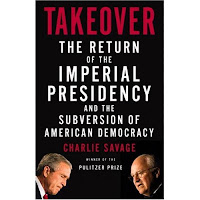 on Savage's work for the Globe to offer a broad discussion of the age-old debate over executive authority - and the repercussions of the Bush-Cheney White House's expansion of presidential power. In Savage's telling, the Bush administration has engineered nothing less than a wide-ranging power grab, asserting its primacy on issues ranging from the momentous (torture, wiretapping, executive privilege) to the trivial (the hiring of interns).

At the center of it all, Savage writes, is Dick Cheney. As the chief of staff in the Ford White House, Cheney was witness to the erosion of presidential power. The Nixon years were the apotheosis of what historian Arthur Schlesinger dubbed "the imperial presidency," the period following World War II when the executive gained power at the expense of Congress. But as the abuses of the Nixon White House came to light, Congress began pushing back. During the mid-1970s, Congress passed laws on war powers, the right to review classified documents and wiretapping and ramped up its oversight authority over the government's security apparatus. That experience of a presidency in retreat left a mark on the young Cheney....

In the current administration, exploiting 9/11 and a supine Republican Congress, the Bush-Cheney White House has pushed through a series of policies and precedents that, seen as a whole, can only be described as radical. Savage probes the litany of constitutionally questionable episodes: illegal wiretapping, military tribunals, withdrawal from treaties, the firing of U.S. attorneys, politically motivated hirings and the broadening of executive privilege, among others.

"Takeover's" unique contribution is to put all of these moves into a coherent ideological framework: the expansion of presidential power, as envisioned by the conservative movement. The advancement of the agenda even extends to the judiciary. As Savage's narrative reveals, some of the names that figured in the evolution of presidentialist legal theory are now familiar, such as John Roberts and Samuel Alito Jr. Also figuring prominently in the story are David Addington, Cheney's chief of staff, and John Yoo, a legal theorist and adviser to the White House.

Their collective efforts have led us to a crucial pass, argues Savage. The aggressive expansion of executive authority under the Bush-Cheney regime has led to the creation of powers that "are now an immutable part of American history - not controversies, but facts." Savage points out (as do other conservatives alarmed at the administration's actions) that these new powers are there for a future president, Republican or Democrat, to use as well - a prospect that may have been obscured by the presidentialists' ideological myopia.