Jeffrey Toobin's new book on the Court, The Nine: Inside the Secret World of the Supreme Court (Doubleday, release date 9/18) is getting a lot of play. A short excerp 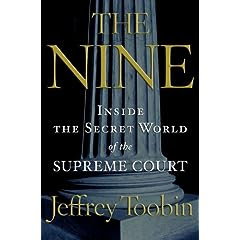 t is here.
Nina Totenberg likes the book and described this way in on NPR:

The plot is simple: the decades-long fight by a new and more extreme brand of conservative to take control of the Supreme Court. It is a fight that fails during the '80s and '90s and even in the early 21st century, despite the fact that Republican appointees far outnumbered Democratic appointees on the court.

The dénouement of the plot comes in 2005 when Justice Sandra Day O'Connor retires and Chief Justice William Rehnquist dies. Both would be replaced by appointees far more conservative — Roberts as chief justice and Alito as associate justice — men in the new conservative mold. Or, as Toobin puts it, "in the mold of the new Republican Party of George W. Bush."

The central thesis, or one might argue, the central disclosure of Toobin's book is his portrayal of Sandra Day O'Connor as increasingly alienated from the Republican Party she loved.

At Concurring Opinions, Frank Pasquale had this to say:

Toobin's book accelerates the classic dynamics of celebrity: it feeds public interest in the justices' quirks and peccadilloes, then leaves us wondering: why are these people so powerful, anyway? As Britney wilted under constant media scrutiny, so too do the justices appear all-too-human under the glare of Toobin's meticulous reporting. Toobin claims that the last five justices appointed have "turned out precisely as might have been expected by" their presidential sponsors. He gives the impression that they mechanically advance the interests of the political machines that elevated them.

"The Nine," the latest book from the indefatigable New Yorker legal correspondent Jeffrey Toobin, provides fascinating glimpses into the humanity of these mortals. But in the end, Toobin falls prey to the temptation to reduce them to "conservative" or "liberal" votes. That temptation is widespread in media coverage of the court, and often obscures the real process of change that takes place inside its closed chambers.

Peter Latman at the Wall Street Journal Law Blog leads off an author Q&A with Toobin by noting that "Everyone at the WSJ is in a tizzy over next week’s publication of Alan Greenspan’s memoirs, but we’re more stoked for the release of “The Nine: Inside the Secret World of the Supreme Court,” by Jeff Toobin." (As an aside: I didn't know they got "stoked" at WSJ. Do "in a tizzy" and "stoked" fit in the same sentence? I can't decide whether this is generational dissonance, or the WSJ's form of generational harmony.)
You can participate in an "Ask the Author" event on SCOTUS Blog, by submitting a question.
More reviews will hit the newspaper stands soon.
Posted by Mary L. Dudziak at 9:12 AM