A Museum for "My Professional Family"

A story in the Vacaville Reporter by Brian Hamlin describes an attempt by a retired superior court judge to create a legal museum in a refurbished courthouse in Solano County, in northern California. The story commences:

"Beyond all the dusty law books, crowded hallways and sometimes spirited courtroom debate, Solano County's legal community has a rich and colorful history -- one that has been largely forgotten in the torrent of day-to-day cases that flood the courts in Fairfield and Vallejo.

"Retired Solano County Superior Court Judge R. Michael Smith wants to put that history in the spotlight with a legal museum he hopes to set up in the historic -- and currently vacant -- county courthouse building on Texas Street in downtown Fairfield. 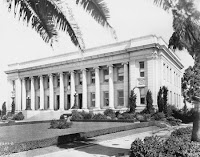 "Plans are underway for a multimillion-dollar renovation of the 1911 granite structure and possible placement of civil courtrooms there. Due to the state of the economy, however, it's not certain when that restoration will begin.

"When it's complete and open to the public again, though, Smith hopes a portion of the courthouse can be devoted to a Solano County legal museum, where visitors can learn about how the legal system evolved in the county, as well as highlighting the lives of the attorneys and judges who made it happen.

"Smith, who's still active as an assigned judge throughout Northern California, began researching Solano County's legal history in the mid-1980s, when he was a deputy district attorney based in the Hall of Justice in Fairfield.

"He began digging through old case log books in the DA's Office and soon was hooked on the research project.

"'I've always been a kind of family historian, and this isn't too different from doing a family history,' Smith said. 'The legal community is my professional family.'"