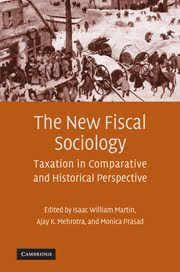 The New Fiscal Sociology: Taxation in Comparative and Historical Perspective, is a collection of essays edited by Isaac William Martin, University of California, San Diego; Ajay K. Mehrotra, Indiana University, Bloomington; and Monica Prasad, Northwestern University. Their introduction, entitled "The Thunder of History: The Origins and Development of the New Fiscal Sociology," is now available via SSRN. Here is the abstract:

Scholars have long recognized the importance of taxation to the study of modern society. In recent decades, a new and innovative wave of multidisciplinary scholarship on the sources and consequences of taxation has begun to emerge. In this introductory chapter, we chronicle the historical roots, recent developments, and future promise of this emerging field, which we call the new fiscal sociology. More specifically, in our introduction we crystallize the developments in this recent scholarship. We argue that new comparative and historical perspectives provide several innovative insights about taxation. First, that economic development does not inevitably lead to a particular form of taxation, but rather that institutional context, political conflicts, and contingent events lead to a diversity of tax states in the modern world. Second, that taxpayer consent is best explained not as coercion, predation, or illusion, but as a collective bargain in which taxpayers give up resources in exchange for collective goods that amplify the society’s productive capacities. And, third, because taxation is central not only to the state’s capacity in war, but in fact to all of social life, the different forms of the tax state explain many of the political and social differences between countries. The essays in this collection, written by leading scholars from a variety of disciplines, showcase the new fiscal sociology. The contributors explore the many ways in which the relations of taxation are pervasive, dynamic, and central to modernity. The specific chapters address the social and historical sources of tax policy, the problem of taxpayer consent, and the social and cultural consequences of taxation. They trace fundamental connections between tax institutions and macro-historical phenomena – wars, shifting racial boundaries, religious traditions, gender regimes, labor systems, and more.

Joseph J. Thorndike, “'The Unfair Advantage of the Few': The New Deal Origins of 'Soak the Rich' Taxation"

Charles Tilly, "Extraction and Democracy"
Posted by Dan Ernst at 1:48 AM