Mark Weiner, Rutgers Newark, on a Fulbright in Iceland
August 11, 2009

If you can imagine how American national identity might have been shaped if the Declaration of Independence had been signed and the Constitutional Convention of 1787 had been held at the bottom of the Grand Canyon, then you have a sense of the depth of the relation between law, nature, and nationhood in Iceland. I send this second post from western Iceland, having recently spent a day exploring Thingvellir, the Assembly Plains, which lies at the symbolic center of what it means to be Icelandic. It has been an extraordinary few days, and in this second post of my term as a Fulbrighter I’d like to discuss three of the places I’ve visited of special interest to legal historians: Thingvellir, the site of the chieftain assembly, or “parliament,” beginning in about 930, known as the Althing; Skálho 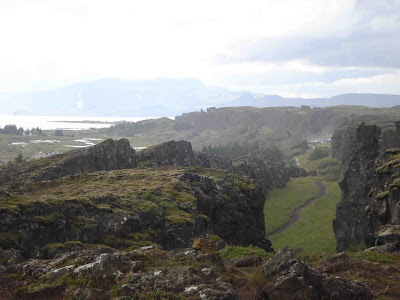 lt, the seat of Icelandic Catholicism beginning in 1056; and Reykholt, a center of political power for Snorri Sturluson (1178/9-1241), the greatest literary figure of medieval Iceland—and, to his lasting credit, a man not only of great legal learning but a historian to boot.

Thingvellir: the heart of Icelandic legal history and national identity.

Before I talk about these sites, though, I’d like to share my overwhelming impression of driving through a country whose legal history has featured importantly in my teaching but which I’ve haven’t previously visited. Above all, as much I’ve read about it before in books, until now I hadn’t fully appreciated just how powerful the landscape of Iceland really is, nor had I appreciated the extent to which the seemingly empty places of no special geographic interest are deeply linked in Icelandic culture to historical events, often through place names. Here is a characteristic, wonderfully parsable entry from the Icelandic Road Atlas about a flat expanse of land off Highway 1 we passed on our travels today: “Leirá (“Clay River”), a farm and church, from earliest times the home of influential men. Chief Justice Magnús Stephensen put up a printing press at a nearby farm, Leirárgar∂ar, and later moved it to Beitista∂ir. Good salmon fishing in the river. Hot springs, swimming pool, boarding school, community center.” Now there’s a vernacular poem about law, language, geography, and national aspiration. How could a legal historian not be enamored by such a country?

Though Thingvellir wasn’t our initial stop after our trip to the Westman Islands, I’ll talk about it first, because it sets the stage for thinking about one of the animating challenges of the legal history of medieval Iceland, the lack of a strong, central executive authority. For me, it’s this challenge that links Thingvellir, Skáholt and Reykholt. And for anyone with a passing familiarity with the history of constitutional development in England, it makes Icelandic history quite exciting. One of the basic stories of the English constitutional tradition is the formation of a strong, territorialized Anglo-Saxon kingship out of the tight-knit, highly personalized bonds of Germanic warrior bands, a story that runs from men like Beowulf to kings like Alfred—and, ultimately, to autocratic Angevin centralizers like Henry II. The creation of strong Anglo-Saxon kingship enabled a host of other legal and cultural developments, including most notably the regulation and restriction of the blood feud (the reciprocal exchange of equivalent levels of violence between kinship groups as a means of settling grievances usually motivated in the first instance by offenses to honor). To put the matter in dramatic terms: if Anglo-Saxon kin-based rule had never developed into territorialized kingly authority, England today might resemble parts of Afghanistan or Somalia.

Medieval Iceland offers a window onto what English society may have looked like before this critical constitutional development. There is a wealth of written source material in the vernacular portraying the early social and legal life of Iceland, especially its extended feuds, and Icelanders are but one branch of the larger Germanic cultural family (the same Norse people who settled here also long ruled over the north of England in the region known as the Danelaw). One reason Iceland has such a rich tradition of writing about the feud is that, unlike England, medieval Iceland never developed a central executive authority that might regulate or constrain it. An executive arm of government was entirely absent. While Iceland did have a legislature and a system of courts, the enforcement of legal judgments was entirely privatized, and thus the possibility that the ascending cycles of feud would erupt was ever present (as described in the seminal work of William Ian Miller).

But this isn’t to say that Icelandic law was simply a medieval Nordic version of the African Nuer studied by E. E. Evans-Prithard. Far from it. For at the same time that Iceland was haunted by feud, it had one of the most elaborate legal institutions of early medieval Europe, the Althing. An assembly of 39 chieftains, or go∂i, the Althing was presided over by an elected lögsögumda∂ur, or law speaker, and it consisted especially of the lögrétta, or law council, and a sophisticated apparatus of courts. The Althing met for the first time in about 930, marking the beginning of the Commonwealth Period, which lasted until 1262-64, when a prolonged period of feud and civil war delivered Iceland into the hands of the kings of Norway.

The Althing met at Thingvellir, which is one of the most visually dramatic places my wife and I have ever encountered. Laying at a meeting point of two great, highly energetic tectonic plates, Thingvellir is a plain (vellir) from which craggy rock cliffs reach spectacularly upward, forming a wide chasm where the chieftains established camp while attending their annual gathering. This dramatic landscape is the central symbol of Icelandic national identity, and like the central symbol of American national identity, the Constitution, it is a symbol of law. It was here that many of the most important events in Icelandic legal history have taken place, including the formation of the Althing; the collective, peaceable conversion to Christianity by means of a legal arbitration in 999/1000; the capitulation of Icelandic chieftains to the king of Norway in 1262-64; and the creation of an indepen 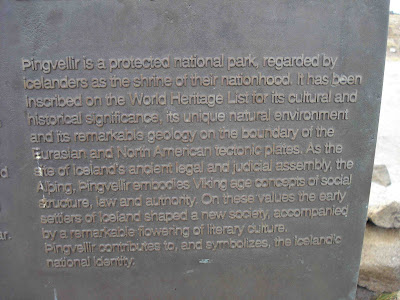 dent Republic of Iceland in 1944. That such central events in the nation’s constitutional history occurred in such a truly extraordinary environment is one of the basic facts of what Iceland means to Icelanders.

A historical marker at Thingvellir.

It also seems to be one of the basic facts of public history in Iceland. The relation between law and the sense of place poses special challenges to public historians and museum curators seeking to present their nation’s legal past. . . . but I see I’ve already written quite a bit. I’ll have to share my reflections on that issue next time—finishing this discussion by returning, as promised, to the relation between Thingvellir, Skáholt and Reykholt. For now, though, the reach of this blog will have to exceed its grasp: it’s time to see if we can fall asleep while outside it’s still light enough to read a book. 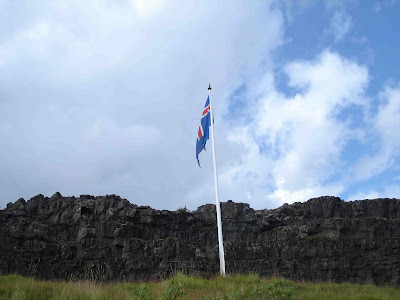