I am thrilled to join Dan, Karen, and Mary on the blog for the month of January. My contributions to the blog this month will focus largely on international legal history, law and American empire, and some thoughts, questions, and pleas for advice on writing and researching a legal history dissertation. But before I get to that, I’d like to begin with a post inspired by my holiday travels and the December issues of the American Historical Review and the Journal of American History.

I recently visited family in “the live music show capital of the world,” Branson, Missouri in the beautiful Ozark Mountains. Branson is a popular tourist destination, known for the family-friendly music shows that line “the strip” on Route 76. Baldknobbers Jamboree Show, a mix of comedy and country music, bills itself as “the show that started it all.” While the Baldknobbers show claims a long history in Branson entertainment, its name derives from the history of late nineteenth century vigilantism in the region. 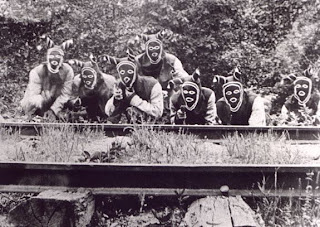 Branson sits in Taney County, named for the fifth Chief Justice of the U.S. Supreme Court Roger Brooke Taney, best known for his majority opinion in Dred Scott v. Sandford (1857). As local historians Elmo Hingenthron and Mary Hartman explain in their book Bald Knobbers:Vigilantes on the Ozarks Frontier, in mid-nineteenth century Taney County “[t]he code of the hills, rather than state laws, influenced outcomes in state trials”(12). In the 1880s, the Bald Knobbers, a group of vigilantes, typically shown in black and white masks, carried out lynchings and other acts of violence in the hills of Taney County, claiming to protect the people of the region from crime and violence where local courts and law enforcement had failed.

Though the group never spread beyond the Ozarks, the Bald Knobbers were part of a broader history of vigilantism and extra-legal violence in America in the late-nineteenth and early twentieth centuries. Unlike many other vigilante groups of the period, the Bald Knobbers appear not to have been racially motivated. But in many ways, they fit within broader narratives of the rise of vigilantism across the South, West, and Midwest in the period. As Michael J. Pfiefer explains in Rough Justice: Lynching and American Society, 1874-1947 (University of Illinois Press, 2006):

The era of the Civil War and Reconstruction marked a turning point in lynching violence across the United States. The war upset prevailing economic, social, racial, legal, and constitutional orders. It precipitated racial leveling, centralization of state authority, and the ascendancy of the North’s dynamic industrial and agricultural capitalism. The war’s result also inspired profound questions about the shape and role of law and the meaning of freedom in the newly remade nation. Beyond the Alleghenies, many American responded to these questions with collective violence that reasserted white supremacy and a vision of criminal justice lodged in localistic prerogatives (13).

Recent work by Pfiefer and Crystal Feimster seems to pose new challenges to some of our central narratives about the history of lynching and vigilantism in the period. In his earlier work, Rough Justice, Pfiefer looked at lynching in the West, Midwest, and South to examine the relationship between lynching and the death penalty. In a recent article in the December issue of the Journal of American History, “The Northern United States and the Genesis of Racial Lynching: The Lynching of African American’s in the Civil War Era,” Pfiefer shifts his focus from to the North to reconsider the origins of racial lynching. From the JAH website:

“While scholars have composed a rich body of work on the lynching of African Americans in the late nineteenth- and early twentieth-century South, Michael J. Pfeifer argues that the study of racial lynching in the North in the early 1860s helps redress key gaps in the historiography of lynching. Examining wartime racial lynchings in Milwaukee, Wisconsin, in 1861 and Newburgh, New York, in 1863, Pfeifer explores how Irish Catholic ethnic solidarity in these communities was as pivotal as a developing concept of “whiteness.” Despite important differences in contexts, the practice and ideology of Northern Irish paralleled, and indeed slightly anticipated, that of white Southerners who later seized upon lynching as a means of rejecting the Reconstruction state’s insistence on color-blind law.”

Understanding how due process has been subverted by mob violence outside of courtrooms is as crucial as understanding struggles for justice within them. But as Pfiefer and Feimster seem to suggest, we may need to look beyond the “code of the hills” and traditional understandings of gender and lynching to reconsider regionalism and the role of women in the history of lynching. You can find Pfiefer’s complete article in the December issue of the JAH and the full review of Feimster’s book in the December issue of the AHR.

Image: A portrayal of the Bald Knobbers, in the film The Shepherd of the Hills (1919)