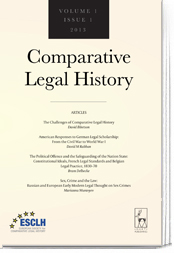 A big hat tip to the ESCLH Blog for its post of the contents of Comparative Legal History 3:2, which we somehow overlooked when it appeared.  The issue includes the papers from the symposium on lay participation in modern law.

Knowing the law and deciding justice: lay expertise in the democratic Athenian courts, by David Mirhady


In the rhetorically charged law courts in which ancient Athenian lay judges exercised their knowledge of the laws and so decided questions of justice, particularly where the quaestio iuris was most at issue, they exercised some quite sophisticated thinking. The judges abided by their oath to vote ‘according to the laws’, but did so with a comprehensive understanding both of the multiplicity of laws that might apply to particular cases and of the even greater number of legal principles implicit in them. After sketching the democratic aspects of Athens’ legal system, the paper begins with Plato’s Apology of Socrates before going on to detail legal reasoning advanced in Lysias’ On the Murder of Eratosthenes and Hyperides’ Against Athenogenes.

Lay participation: the paradox of the jury, by Anthony Musson


Lay participation in the form of the jury has been integral to the administration of justice in England at all levels and in both civil and criminal arenas since the Middle Ages and is popularly regarded as a legacy of Magna Carta by dint of the constitutional significance attributed to the Great Charter over the centuries. Arguably juries provide a bastion against the potential harshness of the state and a buffer against arbitrariness on the part of the judge as well as injecting an element of amateurism to combat the increased professionalism of the legal system. Yet, for all the perceived benefits, serious inadequacies in jurors and even in the apparent fairness of the system have been exposed. Jury decisions, too, have come under scrutiny. This paper examines the paradox of the jury in criminal trials and compares their role in the modern legal system with the historical past.

The politics of jury trials in nineteenth-century Ireland, by Niamh Howlin


This article considers aspects of lay participation in the Irish justice system, focusing on some political dimensions of the trial jury in the nineteenth century. It then identifies some broad themes common to systems of lay participation generally, and particularly nineteenth-century European systems. These include perceptions of legitimacy, state involvement and interference with jury trials, and issues around representativeness. The traditional lack of scholarship in the area of comparative criminal justice history has meant that many of the commonalities between different jury systems have been hitherto unexplored. It is hoped that this paper will contribute to a wider discussion of the various commonalities and differences in the development of lay participation in justice systems.

Forensic oratory and the jury trial in nineteenth-century America, by Simon Stern


At the beginning of the nineteenth century, the American jury trial was a form of popular amusement, rivalling the theatre and often likened to it. The jury's ability to find law, as well as facts, was widely if inconsistently defended. These features were consistent with a view of forensic oratory that emphasized histrionics, declamation and emotionally charged rhetoric as means of legal persuasion. By the end of the century, judges had gained more control of the law-finding power and various questions of fact had been transformed into questions of law. Many of the details that would have aided the lawyers’ dramatic efforts were screened out by a host of new exclusionary rules. These changes in forensic style may have helped to facilitate the decline of the trial, by reorienting its function away from a broadly representative one and towards one that emphasized dispassionate analysis in the service of objectivity.

The schizophrenic jury and other palladia of liberty: a critical historical analysis, by Markus D. Dubber


The historiography of the jury is interestingly schizophrenic, even paradoxical. On one side is the once traditional, and still popular, history of the jury as palladium of liberty. On the other side is the once revisionist, but now widely accepted, account of the jury's origin as instrument of oppression. On one side is the jury as English, local, indigenous, democratic; on the other is the jury as French, central, foreign, autocratic. This paper reflects on this apparent paradox, regarding it as neither sui generis nor in need of resolution. Instead, from the longue durée comparative-historical perspective of New Historical Jurisprudence, the schizophrenic history of the jury and of other palladia of liberty, notably habeas corpus, can be seen to reflect the fundamental and long-standing tension between two modes of governance, law and police, rooted in the distinction between autonomy and heteronomy that has shaped the Western legal-political project since classical Athens.

Rights and courts in pursuit of social change: legal mobilisation in the multi-level European system, by Jacques Vanderlinden

Theologians and contract law: the moral transformation of the ius commune (ca. 1500–1650), by Janwillem Oosterhuis

Five legal revolutions since the 17th century: an analysis of a global legal history, by Thomas Duve

Master of penance: Gratian and the development of penitential thought and law in the twelfth century, by Stephan Dusil
Posted by Dan Ernst at 12:30 AM