New from the University of Georgia Press: Gender and the Jubilee: Black Freedom and the Reconstruction of Citizenship in Civil War Missouri, by Sharon Romeo (University of Alberta). A description from the Press: 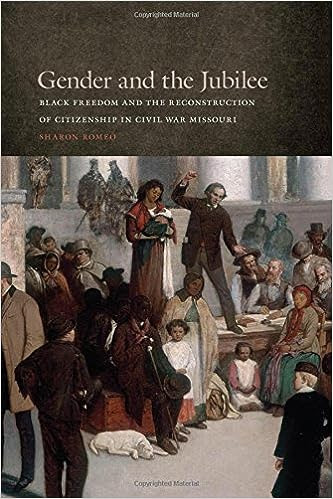 Gender and the Jubilee is a bold reconceptualization of black freedom during the Civil War that uncovers the political and constitutional claims made by African American women. By analyzing the actions of women in the urban environment of St. Louis and the surrounding areas of rural Missouri, Romeo uncovers the confluence of military events, policy changes, and black agency that shaped the gendered paths to freedom and citizenship.

During the turbulent years of the Civil War crisis, African American women asserted their vision of freedom through a multitude of strategies. They took concerns ordinarily under the jurisdiction of civil courts, such as assault and child custody, and transformed them into military matters. African American women petitioned military police for “free papers”; testified against former owners; fled to contraband camps; and “joined the army” with their male relatives, serving as cooks, laundresses, and nurses.

Freedwomen, and even enslaved women, used military courts to lodge complaints against employers and former masters, sought legal recognition of their marriages, and claimed pensions as the widows of war veterans. Through military venues, African American women in a state where the institution of slavery remained unmolested by the Emancipation Proclamation, demonstrated a claim on citizenship rights well before they would be guaranteed through the establishment of the Fourteenth Amendment. The litigating slave women of antebellum St. Louis, and the female activists of the Civil War period, left a rich legal heritage to those who would continue the struggle for civil rights in the postbellum era.


This is a landmark book. Rather than simply resulting from the work of lawmakers who ratified the Fourteenth Amendment during Reconstruction, the concept of ‘citizenship’ emerged out of the innumerable actions carried out by African Americans in the slaveholding states during the Civil War. Romeo shows that in war-torn Missouri, black women petitioned Union officers for their freedom, filed lawsuits against their former owners in military courts, and claimed widows’ pensions after the deaths of their veteran husbands. By documenting black women’s activism in a state where the Emancipation Proclamation did not even apply, Romeo forces us to reexamine precisely how and why constitutional and legal change occurred during this period.” —Timothy Huebner