Reviewed: Kramer, Dynamic of Destruction, and Stone, World War I

The "culture of destruction" in World War I is the topic of a review of two new books in the Times Literary Supplement (London). Craig Gibson reviews Alan Kramer, DYNAMIC OF DESTRUCTION: Culture and mass killing in the first world war (Oxford University Press) and Norman Stone, WORLD WAR ONE: A short hi

World War II "seems to have a monopoly on much of the twentieth century’s worst cruelties," Gibson writes. But Kramer "wants us to re-examine the First World War for evidence of similar violence, in kind if not in scale, and for clues as to why the 1914–45 era as a whole has become synonymous with a particularly cynical type of warfare." He uses the mass killings and destruction following the German invasion of Louvain, Belgium, "as a starting point for a discussion of some of the wanton awfulness that Europeans perpetrated on each other (and the world) during the first half of the twentieth century." But

the case of Louvain was not unique, nor was it the first town where the Occupiers perpetrated atrocities. Because of its cultural importance, and because of the number of citizens murdered, however, Louvain has become synonymous with the crimes committed by the Germans in the First World War, as Auschwitz has for the later conflict. At the same time, Kramer argues that, though particularly heinous, Louvain was part of a broader trend – and one not necessarily the exclusive purview of Germany’s Sonderweg. Crimes against civilians and enemy combatants had become part of warfare in the early twentieth century – despite the good efforts of various international conventions and organizations such as the Red Cross. 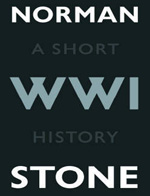 behind the violence was "the enemy within, a recurring problem – sometimes real, oftentimes imagined – for nation states in the era of the First World War....The Russian, German, Austro-Hungarian and Ottoman Empires contained large minorities whose loyalty to their rulers remained in doubt." In addition, "the totality of the First World War, and by that one means the total mobilization of the nation’s resources in the pursuit of total victory, has to be taken into account....Total war required the dehumanization of the enemy, which included the mobilization of the civilian populace for hatred."
In contrast to Kramer, Stone's new book is a traditional account of World War I, an "entertaining history, filled with colour and bombast, less concerned with providing reams of documentation and more with telling an interesting tale well."
The rest is here.
Posted by Mary L. Dudziak at 9:26 AM

With advances in technology, shouldn't it be expected that violence will get more violent? Isn't that the background for "culture of destruction" along the lines of Schumpeter's creative destruction of capitalism? There is competition in violence, isn't there?