New Release: "Constitutionalism in the Approach and Aftermath of the Civil War"

New from Fordham University Press: Constitutionalism in the Approach and Aftermath of the Civil War, edited by Paul D. Moreno (Hillsdale College) and Johnathan O'Neill (Georgia Southern University). The Press describes the book as follows: 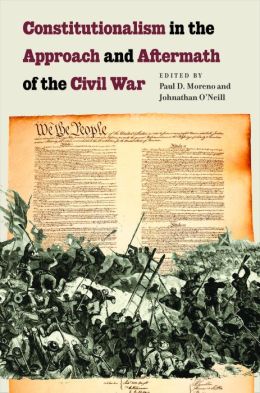 The irreducibly constitutional nature of the Civil War’s prelude and legacy is the focus of this absorbing collection of nine essays by a diversity of political theorists and historians. The contributors examine key constitutional developments leading up to the war, the crucial role of Abraham Lincoln’s statesmanship, and how the constitutional aspects of the war and Reconstruction endured in the late nineteenth and early twentieth centuries. This thoughtful, informative volume covers a wide range of topics: from George Washington’s conception of the Union and his fears for its future to Martin Van Buren’s state-centered, anti-secessionist federalism; from Lincoln’s approach to citizenship for African Americans to Woodrow Wilson’s attempt to appropriate Lincoln for the goals of Progressivism. Each essay zeroes in on the constitutional causes or consequences of the war and emphasizes how constitutional principles shape political activity. Accordingly, important figures, disputes, and judicial decisions are placed within the broader context of the constitutional system to explain how ideas and institutions, independently and in dialogue with the courts, have oriented political action and shaped events over time.

More information is available here.
Posted by Karen Tani at 7:30 AM