Arnold on Poison and Pollution

David Arnold (Warwick) has published his study of poisoning in colonial and post-colonial India: Toxic Histories: Poison and Pollution in Modern India (Cambridge 2016). 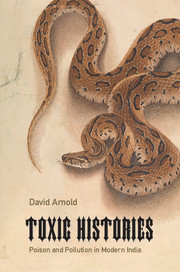 Toxic Histories combines social, scientific, medical and environmental history to demonstrate the critical importance of poison and pollution to colonial governance, scientific authority and public anxiety in India between the 1830s and 1950s. Against the background of India's 'poison culture' and periodic 'poison panics', David Arnold considers why many familiar substances came to be regarded under colonialism as dangerous poisons. As well as the criminal uses of poison, Toxic Histories shows how European and Indian scientists were instrumental in creating a distinctive system of forensic toxicology and medical jurisprudence designed for Indian needs and conditions, and how local, as well as universal, poison knowledge could serve constructive scientific and medical purposes. Arnold reflects on how the 'fear of a poisoned world' spilt over into concerns about contamination and pollution, giving ideas of toxicity a wider social and political significance that has continued into India's postcolonial era.

"In this meticulous toxicological assay of British India, David Arnold challenges us to rethink how we draw boundaries between the therapeutic and the poisonous, between purity and danger, and between European and Indigenous. Colonialism is refigured as the governance of poisons - and modernity turns into the titrating of toxicities. A revealing forensic study of poison as substance and metaphor under colonial rule, Toxic Histories also shows us how - and why - toxicity became a concept intrinsic to India's modernity. Thus Arnold traces the sad genealogy of our poisoned world." -Warwick Anderson, University of Sydney
"The idea of poison lurks below the surface of much of Indian history but it has rarely been investigated in its own right. In this path-breaking book, David Arnold demonstrates the importance of doing so. Exploring the practical uses and the ideological significance of poisons, Arnold shows how narratives of toxicity became central to the construction and evaluation of India’s modernity. Brimming with fascinating insights, there is scarcely any aspect of Indian history which is not illuminated by this book." -Mark Harrison, University of Oxford
"Against the vast backdrop of India’s pre-, colonial and post-colonial history, the eminent historian David Arnold asks the provocative question: do different places have their own toxic histories? In an outstanding display of scholarship, in equal measures subtle and sophisticated, full of striking and illuminating historical examples, and written with a clear sense of how his analysis might engage with critical understandings of our own toxic present, Arnold’s answer is a satisfyingly complex "yes"." -Ian Burney, University of Manchester
More information, including the TOC and a sample from the introduction, is available here.
Posted by Mitra Sharafi at 11:11 AM