Reviewed: McGinty, Lincoln and the Court

LINCOLN AND THE COURT by Brian McGinty (Harvard University Press) has a brief review in the Washington Post by Charles Lane. Lane writes: 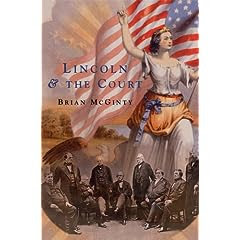 Lincoln's struggle to withstand judicial review is the subject of Brian McGinty's fascinating book. Lincoln thought that the Southern rebellion posed an existential threat to the United States, and that he, as commander-in-chief, was authorized to take extraordinary measures to save the Union. These included the suspension of habeas corpus without prior congressional approval, a blockade of Southern states by U.S. warships and the emancipation of slaves without compensation.
History has generally been kind to Lincoln's approach, but it was controversial in its time. Taney challenged the suspension of habeas corpus in the 1861 case of ex parte Merryman, asserting that it was "too plain and too well settled to be open to dispute" that only Congress could suspend the right to challenge an unlawful detention in court. But McGinty, a lawyer as well as a historian, shows that the law was cloudier than Taney acknowledged -- and that the Southern-sympathizing chief justice completely failed to take account of the secessionist disorder raging around Washington.

Fortunately for Lincoln, Congress subsequently ratified his decision on habeas.....

The HUP book description claims that "McGinty rescues the story of Abraham Lincoln and the Supreme Court from long and undeserved neglect," but as Lane notes the topic of Lincoln and the Court "has been covered in other recent books." Still, "the issue of presidential power in wartime is as fresh as today's headlines."
The rest is here.
Posted by Mary L. Dudziak at 9:02 AM