Boyer on Prest on Blackstone 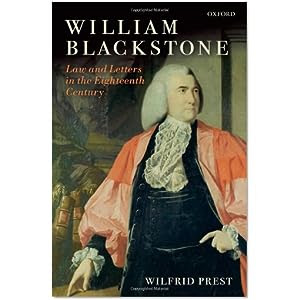 This fine biography of Sir William Blackstone displays both Wilfrid Prest's command of English legal history and his ability to tell the dancer from the dance. For more than two centuries now, Blackstone the jurisprudent has been obscured by Blackstone the law-book. Behind the lucidity and balance of Blackstone's Commentaries, Prest reveals the pompous, energetic man who penned them: an orphan, a scholar, a forceful academic politician, a shrewd estate manager, and, finally, when his ship came in, a thoughtful and progressive judge. Prest has also overcome the temptation to dwell on his subject's times rather than his life. To our continuing discussion of Blackstone, this book restores the human element. The William Blackstone who appears in these pages is a man to be taken on his own forceful terms.