Rakove on 'Founders Chic,' Wood on Washington bios, Appiah on Kloppenberg, and more in the book reviews

First Family: Abigail and John by Joseph J. Ellis has been reviewed by Jack Rakove in The New Republic.  Rakove writes:

Beginning with Founding Brothers, and in other books including this one, Ellis has with great success applied the formula that has made him the great academic beneficiary of what we might call Founders Chic. His rules are clear. He likes to limit his books’ number of chapters (five to seven) and overall length. Each chapter has a clear theme, framed within neat chronological limits. Ellis is a natural storyteller, a conversational historian in the ease with which he addresses readers. He generally avoids the distractions and complications that other historians feel driven to work out. He projects a great deal of confidence in his own judgments, which smack of genuine scholarly insight. Turning out four books of this kind in roughly a dozen years is certainly an accomplishment, which I admire not least because I spent the better part of the past decade producing my own contribution to the genre.

If a lay reader has to choose among these three books for a quick, easy, and engaging introduction to the subject of the Adamses, First Family is ideal. Ellis makes superb use of the wonderful letters between Abigail and John—particularly in the period between 1774 and 1784, when they saw each other for a bare twenty-one months—to carry us along; and really, any writer who allows the family to speak for itself starts out with powerful literary advantages. The problem is that Ellis demands unconscionably little of his readers, and this may help to explain the book’s weakness. Next to the recent work by Holton and Gelles, First Family seems thin, more a quick romp than a sustained study—Founders Chic made into Founders Lite. 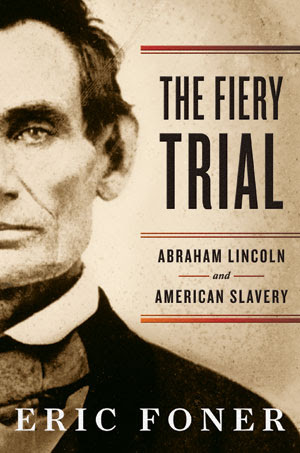 by Barnet Schecter and Washington: A Life

by Ron Chernow in the New York Review of Books.  Also in NYRB, Kwame Anthony Appiah takes up A Brief Inquiry into the Meaning of Sin and Faith, with “On My Religion”

THE FIERY TRIAL: Abraham Lincoln and American Slavery by Eric Foner has been reviewed by James McPherson in the New York Review of Books, and by Fred Kaplan in the Washington Post.

In the New York Times this weekend are reviews of BLOODLANDS: Europe Between Hitler and Stalin by Timothy Snyder, AND THE SHOW WENT ON:  Cultural Life in Nazi-Occupied Paris by Alan Riding, COLONEL ROOSEVELT by Edmund Morris, and APOLLO’S ANGELS:  A History of Ballet by Jennifer Homans.
Posted by Mary L. Dudziak at 10:03 AM