In the Chronicle of Higher Education, Louis Masur (Trinity College) writes about the spate of books and exhibits commemorating the sesquicentennial of the Civil War. He focuses on Douglas R. Egerton's Year of Meteors: Stephen Douglas, Abraham Lincoln, and the Election That Brought on the Civil War (Bloomsbury Press); Eric Foner's The Fiery Trial: Abraham Lincoln and American Slavery (W.W. Norton); and "Discovering the Civil War," a two-part public exhibition at the National Archives and Records Administration. Masur predicts that over the next four years "we will be inundated with reflections and publications." 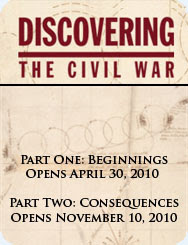 Why so much interest? Masur believes that the Civil War, perhaps more than any other event in American history, "invite[s] . . . speculation about whether it could have been avoided, or turned out differently." It raises "nettlesome" questions about causation and contingency.

Americans also continue to view the Civil War as transformational. And they are right to do so, Masur suggests. He ends his essay on this note:

In 1873, Mark Twain and Charles Dudley Warner observed that the Civil War had "uprooted institutions that were centuries old, changed the politics of a people, transformed the social life of half the country, and wrought so profoundly upon the entire national character that the influence cannot be measured short of two or three generations." The sesquicentennial will provide a continuing opportunity to try to fathom those changes and to understand how the nation is still challenged by forces unleashed in those uncompromising years.